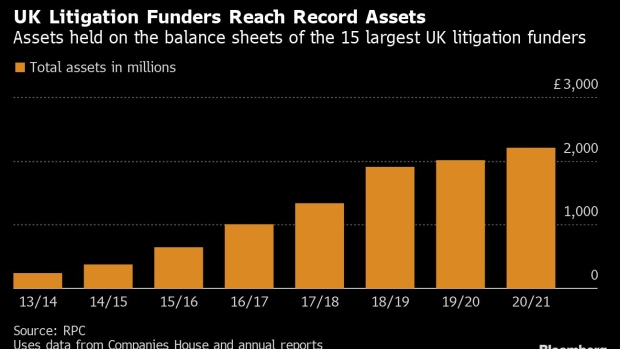 (Bloomberg) -- Financiers are helping to fuel a rise in US-style class-action lawsuits in the UK courts, lured by the promise of big payouts.

The British litigation finance industry -- which pays legal fees upfront and shares in any eventual payout -- has almost doubled the size of its UK assets over the past three years, with as much as £2.2 billion ($2.7 billion) filling up balance sheets, according to data from law firm RPC. That war chest is being used to fund a growing number of lawsuits that are going after the likes of Apple Inc., Meta Platforms Inc. and BT Group Plc.

Opt-out class action style lawsuits, where someone impacted doesn’t have to be aware of the case to be included, are being tipped as a good bet for investors as they offer the prospect of huge payouts if successful.

“Class actions have the potential for big rewards,” Charlotte Henschen, a lawyer at RPC, said. “Funders like class action type disputes because there is an opportunity for funders to get in at the beginning. It’s also an attractive group to represent for sheer reach and volume.”

The UK’s opt-out class action regime, known as collective proceedings, finally started to gain traction last year. Not a single claim was allowed to go ahead in the five years since it began in 2015, but 2021 saw four claims given the green light. There are now nine claims certified at the Competition Appeal Tribunal with many more waiting in the wings.

The system currently only allows claims related to competition law and this year has seen cases filed over a power cable cartel and Meta’s alleged misuse of personal data.

Two of the largest cases, a foreign exchange spot trading cartel and a truck cartel, are now pulling in as much as £50 million ($59.1 million) in funding when measured with potential funding for adverse costs, according to a report by consultancy Brattle.

“If funding didn’t exist tomorrow the CAT would be empty and there would be no cases being pursued there,” said Susan Dunn, founder of Harbour Litigation Funding and the chair of industry body The Association of Litigation Funders.

But the relationship between the funders and the people who run the cases hasn’t been without tension.

Walter Merricks, the representative of the UK’s largest opt-out class action against Mastercard, ran into difficulty when Burford Capital Ltd dropped out of funding his case after it was denied certification by the CAT in 2017. It later found a new investor, Innsworth, and appealed to both the Court of Appeal and the Supreme Court -- which it won.

A spokesman for Burford said it did not comment on the decision-making over its investments.

How much the funders can win for these sorts of claims will vary, with agreements dependent on the size and budget with rates usually increasing over time.

“A reasonable assumption is that a funder will charge 30% to 40% of the proceeds in return for its non-recourse funding, which will be completely lost if the case is not successful,” Harbour’s Dunn said.