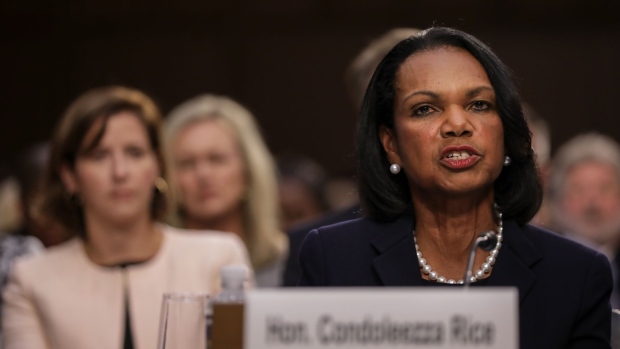 (Bloomberg) -- Saudi Arabia-backed LIV Golf said in a court filing that former US Secretary of State Condoleezza Rice may have tried to influence the Justice Department to not investigate PGA Tour Inc. for possible antitrust violations as a clash between the rivals heated up last year.

LIV made the claim in a filing Monday in its antitrust suit against PGA, in which it accuses the dominant US golf circuit of trying to illegally prevent new competition. PGA did so, LIV claims, in part by trying to use Rice, a member of the Augusta National Golf Club, to influence the DOJ. Another member was “apparently” asked to lobby Arkansas Senator Tom Cotton, LIV said.

LIV has subpoenaed a half dozen independent PGA directors and former PGA commissioner Tim Finchem for their communications with Rice and other Augusta National members who allegedly engaged in “anti-LIV” efforts, according to the filing in federal court in San Jose, California. The specific actions that Rice and others allegedly took were redacted.

“The glimpses LIV has seen of Augusta members’ involvement in the Tour’s alleged illegal conduct reveal why the Tour and its directors seek to conceal these communications from discovery,” LIV said in the filing.

“Trying to pretend she has the slightest thing to do with this lawsuit is ridiculous and pure harassment,” Peters said in a statement.

The lobbying claim comes as the PGA and LIV spar over records sought by each side ahead of a trial set for January 2024. The PGA has been wrangling with Saudi Arabia’s Public Investment Fund over information the tour wants from the fund and its governor, with a ruling on that fight expected soon.

LIV claims that the PGA tapped Augusta National members as part of an “us or them” campaign “at all levels of golf’s ecosystem,” according to Monday’s filing. The PGA directors’ communications with such power brokers “goes to the heart” of the case, LIV said.

The Justice Department opened a probe into PGA last year, sending inquiries to golfers’ agents about the tour’s bylaws on participating in other golf events, and its actions related to LIV Golf, the Wall Street Journal reported at the time.

LIV has also gone to court in Washington to enforce a different subpoena it issued to the PGA’s public-relations firm, which also represents a group of families of 9/11 victims who are opposed to LIV’s tournaments.

(Updates with detail on fight over documents from Saudi investment fund in ninth paragraph.)