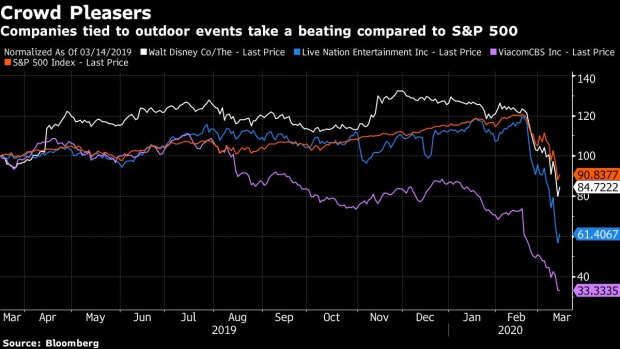 (Bloomberg) -- The relentless spread of the coronavirus is forcing a sweeping shutdown of live events across the U.S., driving deep losses in media and entertainment stocks as investors try to untangle what may be several quarters of uncertainty.

Walt Disney Co., which owns television rights for major sports that have been suspended because of the virus, such as the National Basketball Association, and has theme parks around the world, has fallen more than 35% from its high in November to three-year lows.

The largest concert promoter in the U.S. and owner of Ticketmaster, Live Nation Entertainment, has plunged about 45% since reaching its February peak. The carrier of the canceled NCAA men’s basketball tournament, ViacomCBS Inc., has tumbled around 70% since its top in July.

Even compared to the S&P 500’s furious decline of more than 26% from its February record, those numbers are dramatic.

“The closures to leisure-related events is going to take a toll on many different industries because of the intertwined network,” Nick Licouris, an investment adviser at Gerber Kawasaki Inc., said in an interview. “If history is an indicator of what is to come, we should see a slow down in the next few quarters, and if all goes well we should start to see things normalize in the next nine to twelve months.”

The sudden closing of large public events across the country highlights the fragile web of media and entertainment industries that rely on mass gatherings, and how hard it is for investors to grasp the long-term economic impact.

For instance, MoffettNathanson estimates Walt Disney Co. will take a hit of $481 million just from the potential loss of advertising revenue from the NBA playoffs. The company has also said it will shutdown its theme parks through the end of March.

Michael Nathanson, a founding partner at MoffettNathanson, warned clients in a note Tuesday that “there are many unanswered questions” as they continue to try to assess the impact of canceled sporting events due to the virus outbreak.

“It is unclear how quickly the networks are made whole on that lost revenue and in what way,” said Lightshed Partners’ Richard Greenfield. The far bigger advertising issue for all of broadcast and cable networks is that “suspending live sports such as the NBA could send TV advertising, as a whole, into a sharp downturn after holding up remarkably well in recent weeks.”

The sports industry is just one of the sectors reeling in from the virus. Entertainment industry conferences, including the Austin, Texas-held SXSW, in addition to major music concerts such as Coachella and the Ultra Music Festival have also been suspended because of the outbreak.

“There is still a lot of concern about this on a global scale if the government does not take appropriate measures,” said Gerber Kawasaki’s Licouris, noting that companies tied to the leisure sector “will suffer drastically” if they are not financially adept based on their debt.

However, well-positioned businesses “will get through this rough patch and recover with time,” he said.

To contact the editors responsible for this story: Catherine Larkin at clarkin4@bloomberg.net, Randall Jensen, Dave Liedtka