It’s what we all needed to hear: “Nothing can stop America” — Warren Buffett’s way of saying, “We will get through this.”

Saturday evenings aren’t normally the ideal time for tuning into a multi-hour investor conference, especially after being cooped up all week working from home due to the COVID-19 pandemic. But mere minutes into the live-streamed Berkshire Hathaway Inc. annual shareholder meeting, it was clear that something much more meaningful was unfolding. Buffett, sitting on a stage in an empty Omaha arena, began with a history lesson like no other — a vivid walk through the other moments in America’s past that tested its resiliency, but never broke it. At 89 years old, he’s lived through many of them.

The current crisis “is creating a huge amount of anxiety and changing people's psyche and causing them to somewhat lose their bearings, understandably,” the chairman and CEO of Berkshire told his virtual listeners, while peering out where some 40,000 of them would normally be sitting. “The American magic has always prevailed and it will do so again.”

While his unwavering confidence in the U.S. economy is hardly a new theme in Buffett’s lectures, they’re not normally so moving. Like many of those watching, he was in need of a haircut and acknowledged it, adding that he had grown used to wearing sweat suits — as opposed to the real suit and tie he donned on Saturday. It was a humanizing moment. Watching Buffett was like watching Dr. Anthony Fauci or New York Governor Andrew Cuomo, the two government leaders whose comforting words and realism have probably stuck with Americans most during the pandemic and helped to create a sense of hope and community.

Even so, going into the event, it wasn’t quite so clear that Buffett still believed in his mantra, “America’s best days lie ahead.” He had been notably quiet in recent weeks, and Berkshire was selling stock and shunning acquisitions, a bearish signal for a company where the ethos is to buy when others are panicking. After all, Buffett once wrote:

Every decade or so, dark clouds will fill the economic skies, and they will briefly rain gold. When downpours of that sort occur, it’s imperative that we rush outdoors carrying washtubs, not teaspoons. And that we will do.

Berkshire has done neither, even with US$137 billion of cash just sitting there. As such, some say his optimistic outlook doesn’t align with his actions of late. But Buffett explained that the panic hasn’t hit the stock and credit markets to the extent it did during the 2008 financial crisis — or not for as long, thanks to the extraordinary measures taken by the Federal Reserve. His investing during that time “was not designed to make a statement, it was designed to take advantage of what we thought were very attractive terms,” he said. He’s not finding as many enticing investments now, partly because of those Fed actions, which removed the need for many companies to seek a lifeline from a deep-pocketed savior like Buffett.

The complicated public-health aspect of this downturn also makes it impossible to predict how long it will carry on or how much worse it will get before it gets better. “The cash position isn’t that huge when I look at worst-case possibilities,” Buffett said Saturday. 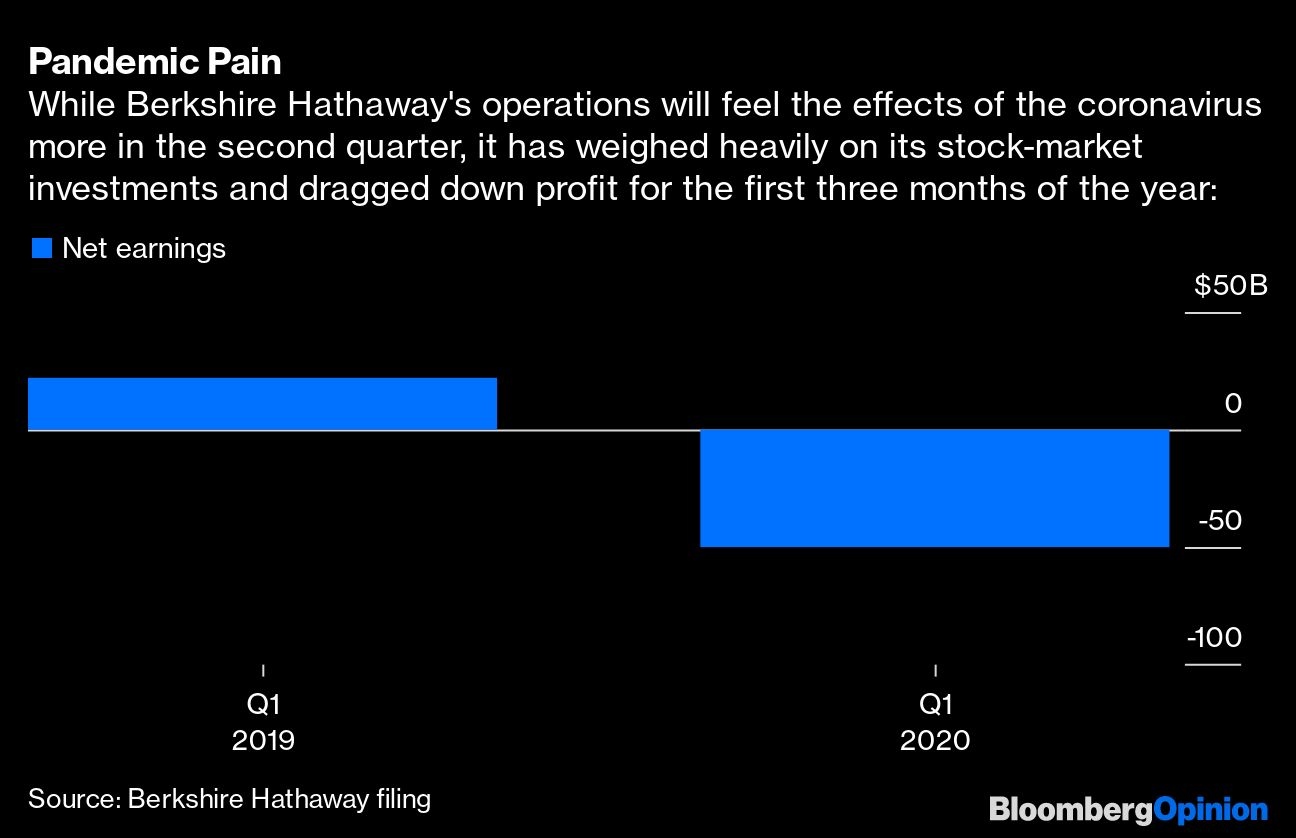 There are also some industries that may be permanently altered by the coronavirus, such as airlines, Buffett said. Berkshire was a top-three shareholder in American Airlines Group Inc., Delta Air Lines Inc., Southwest Airlines Co. and United Airlines Holdings Inc. as recently as early April. Buffett has since decided to completely exit those positions: “The world changed for airlines and we wish them well.”

Even though Buffett is still a believer in the long-term prospects of the U.S. economy as a whole, his 180-degree turn on the airline industry shows that he sees the virus changing at least some consumer behavior for good. That will affect future dealmaking. One of Buffett’s biggest takeovers was Precision Castparts, a supplier of airplane engine parts, which he bought for $37 billion in 2016. It was also his last major transaction.

As fascinating as Buffett’s commentary was, the Q&A wasn’t the same without his usual sidekick, Charlie Munger, who is known for his quips and comically curt responses compared to Buffett’s monologues. Munger, Berkshire’s longtime vice chairman, is 96 years old and lives in California. Though he is in good health, Buffett said, it didn’t make sense to have him travel to Omaha — a reminder of both their ages, even if they are as sharp as ever.

Instead of Munger, Buffett was joined by Greg Abel, who oversees all non-insurance operations under the Berkshire umbrella and is Buffett’s likely successor. "When I talk to Greg, sometimes I wonder, am I talking to Warren?” Lawrence Cunningham, a professor at George Washington University Law School and author of books on Berkshire, said during the meeting pre-show. It may be a while before others see him that way. While Abel answered some questions Saturday, he mostly deferred to Buffett and stuck to high-level corporate-speak.

Buffett, who recently joked that his age puts him “in the urgent zone,” did have a message for whoever does replace him: “I will bet on America the rest of my life, and I hope my successors at Berkshire do.”

He closed the evening with a smile and a laugh: “We’ll see you next year and we’ll fill this place!” Let’s hope. But if it turns out that this virtual event was the Oracle’s last time as the master of ceremonies, it will stand as a fascinating and beautiful sermon that will be remembered.