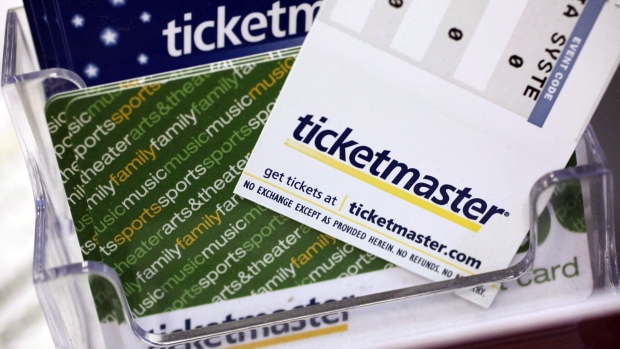 Ticketmaster tickets and gift cards are shown at a box office in San Jose, Calif., on May 11, 2009. , THE CANADIAN PRESS/AP, Paul Sakuma

The U.S. Justice Department is readying a lawsuit against Live Nation Entertainment Inc. over alleged violations of conditions imposed on the company by regulators when it bought Ticketmaster nearly a decade ago, according to a person familiar with the matter.

The department’s antitrust division approved the merger in 2010 after imposing a host of rules that that were intended to protect competition in live music promotion and ticketing.

That agreement expires next year, and the division has been investigating complaints from industry players that it isn’t working as intended.

The Justice Department and Live Nation declined to comment. Live Nation, the world’s largest promoter, fell as much as 8.2 per cent to US$34.74 after the Wall Street Journal reported on the department’s plans.

The government investigation comes as prices for music concerts are skyrocketing. The live-music industry surpassed US$8 billion in revenue in 2017, and is on pace for another record in 2019. Live Nation touts its ability to charge higher prices.

Live Nation merger with Ticketmaster united the world’s largest concert promoter with the dominant ticket seller in North America. The Justice Department approved the deal a year later, but imposed limits on Live Nation, including a ban on retaliating against any concert site that signs a ticketing deal with a competitor to Ticketmaster. That curb expires next year.

Industry executives have long complained in private about the power of Live Nation. Even with the federal consent decree, executives have argued venues would fear picking a rival to Ticketmaster because Live Nation would then direct its artists to competing venues.

Live Nation accounted for more than four times more ticket sales than any other promoter last year, according to Pollstar, an industry trade publication. Fans purchased 49.5 million tickets to Live nation events, and 11.6 million tickets to events from AEG Presents.

The reported Justice Department scrutiny coincides with plans by Live Nation’s largest shareholder, John Malone’s Liberty Media Corp. To increase its stake in IHeart Media Inc., the largest radio station owner. That would add to holdings of Malone’s that include Sirius XM Holdings Inc. and Pandora Media, along with Live Nation and Ticketmaster.