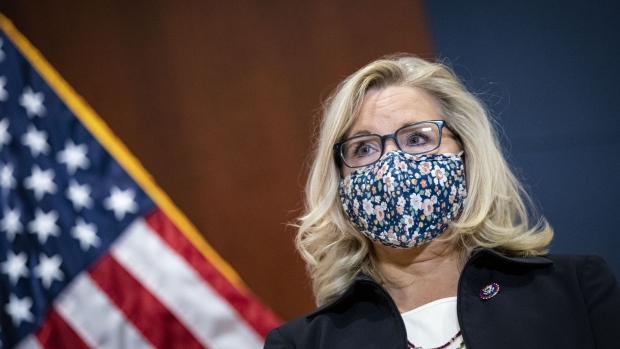 Representative Liz Cheney, a Republican from Wyoming, wears a protective mask during a news conference following a House Republicans meeting at the U.S. Capitol in Washington, D.C., U.S., on Tuesday, March 9, 2021. House lawmakers could begin consideration as soon as today on a $1.9 trillion stimulus package, and Democrats expect to pass the measure despite a narrow majority and quiet complaints from progressives. , Bloomberg

On the eve of a vote by her fellow Republicans that is all but certain to remove her from a party leadership post, Cheney appeared on the House floor Tuesday night to drive home her message that those who refuse to accept the election results affirmed by officials from both parties and the courts “are at war with the Constitution.”

“Today, we face a threat America has never seen before. A former president who provoked a violent attack on this Capitol, in an effort to steal the election, has resumed his aggressive efforts to convince Americans that the election was stolen from him,” Cheney said.

“I will not sit back and watch in silence,” she added. “We must speak the truth. Our election was not stolen.”

The Wednesday morning vote by Republican House members will be done by secret ballot.

Cheney, the No. 3 House Republican, has become increasingly isolated in her party for her persistent rebuttals to Trump’s false claims that the 2020 election was stolen. House GOP leader Kevin McCarthy has said that’s become a distraction for Republicans and backs replacing her as Republican conference chair with New York Representative Elise Stefanik, a Trump loyalist.

The former president, meanwhile, has kept up a drumbeat of attacks on Cheney.

“The House GOP has a massive opportunity to upgrade this week from warmonger Liz Cheney to gifted communicator Elise Stefanik,” Trump said in a statement released Monday.