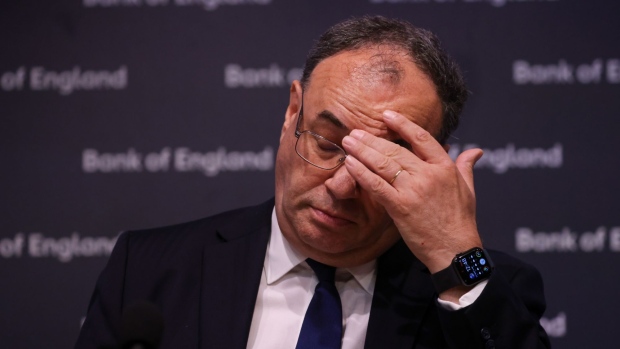 Andrew Bailey, governor of the Bank of England (BOE), during the Monetary Policy Report news conference at the bank's headquarters in the City of London, UK, on Thursday, Aug. 4, 2022. The Bank of England unleashed its biggest interest-rate hike in 27 years as it warned the UK is heading for more than a year of recession under the weight of soaring inflation. Photographer: Hollie Adams/Bloomberg , Bloomberg

(Bloomberg) -- The Bank of England may be asked to abandon its 2% inflation target and instead focus on boosting the economy, if Foreign Minister Liz Truss wins the Conservative Party leadership contest to become the UK’s next prime minister, the Telegraph reported.

Andrew Bailey, the Bank’s Governor, may be ordered to target nominal gross domestic product in the future rather than price changes, marking a major shift from the current system where the Monetary Policy Committee seeks to keep inflation around 2%. The newspaper cited plans being floated by allies of Truss, who is ahead of former Treasury Secretary Rishi Sunak in the leadership contest.

The shift to “nominal GDP targeting” would mean the bank would adjust interest rates to control the amount of spending in the economy, rather than inflation itself, the Telegraph said.

The suggested reform would be one of the several options being considered by the Truss campaign, with discussions at a very early stage, the newspaper said.