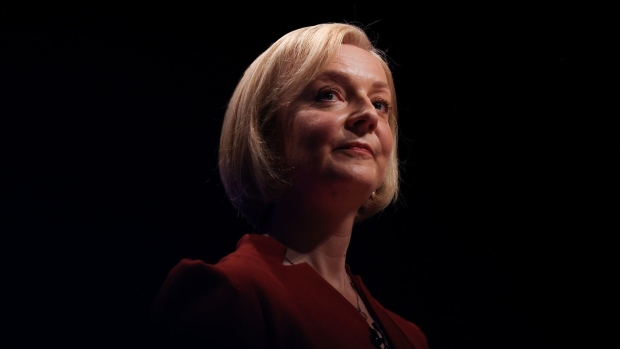 (Bloomberg) -- On the first night of the most chaotic Tory conference that anyone there could remember, Michael Gove moved through the bar at the Hyatt Regency Hotel sounding out disgruntled lawmakers.

The veteran former cabinet minister, who’d had a hand in ousting two of the last three Conservative prime ministers, set the tone for the conference earlier on Sunday when he said Prime Minister Liz Truss’s signature plan to cut taxes for Britain’s highest earners was morally wrong. As Gove swept by seeking other dissenters, Truss was in a suite upstairs running the numbers and preparing for a humiliating U-turn.

Truss, 47, had arrived in Birmingham determined to mark the end of a difficult first month in office by stamping her authority on the ruling party. Instead, she was often hidden away in desperate private meetings as her opponents worked openly against the government and her cabinet squabbled in public. Conversations as events unfolded with dozens of ministers, Tory MPs and political aides who asked not to be identified suggest the premier is already facing a fight to survive.

“It’s looking really perilous for her,” said one despairing MP, who had watched Gove on maneuvers.

Read More: Some of Truss’s Top Team Say Her UK Project May Already Be Over

Truss was already under intense pressure before the conference. She and Chancellor of the Exchequer Kwasi Kwarteng had spent years working on plans for a small-state, deregulated Britain, yet they had failed to prepare financial markets for the biggest package of unfunded tax cuts in half a century when they unveiled it on Sept. 23.

Turmoil ensued. The Bank of England was forced to come to the rescue and after the dust had somewhat settled, millions of already struggling Britons faced massively inflated mortgage costs. That left the prime minister with a major credibility challenge to overcome.

Inside her inner circle, her aides insist that Truss can turn things around. One described the mood as focused and determined and that while her slimmed-down Downing Street team is overstretched, the prime minister herself is full of energy. Another said that with the tax cut U-turn out of the way, they hope Tory MPs will rally behind her broader agenda and a record deficit in polls will narrow. Truss herself asked the party to judge her a year from now when her growth plan has had time to work.

But she may not get that long.

Ministers were drinking £8 ($9) pints of Heineken beer, hobnobbing with donors and corporate lobbyists at the Hyatt bar when Kwarteng was pulled from a curry dinner to deal with the growing revolt over their tax-cut plan.

The decision to drop the tax cut was so rushed it caught Truss’s ministers by surprise. Her aides too.

The prime minister had already done embargoed interviews with broadcasters insisting she would not back down. They were played out on Monday morning as the media were simultaneously reporting her U-turn. Truss’s critics were galvanized.

On Monday night in the Hyatt one cabinet minister rolled their eyes at the crowd mobbing Gove at a champagne reception. By Tuesday, camera crews and journalists were chasing him through the conference center, asking if he had more support than the premier.

With his track record of conspiring against most prime ministers he’s worked for, Gove recognizes that he’s probably had his last cabinet job, according to a person familiar with his thinking. He was telling people that he’s motivated to do what’s best for the Conservative Party.

Other Truss critics do still have ambitions. Grant Shapps, another former cabinet minister who was also marshaling opposition to Truss in Birmingham, warned on Times Radio that the Tory party would not “sit on their hands” if poll numbers don’t improve.

Even MPs who were broadly sympathetic to the prime minister were upset by how she’d handled her tax cut and its aftermath. One said that she’d opened the door to future rebellions and completely undermined her claim that she didn’t mind being unpopular to deliver on her plans.

Another MP said Truss would always have had a bloc of Tories skeptical of her — those who wanted former Chancellor Rishi Sunak to be leader. But she’d also antagonized her own backers who’d spent political capital defending a controversial tax cut only to see the prime minister abandon her position.

Home Secretary Suella Braverman said she was “disappointed” that Truss had caved in, and accused Gove of staging a “coup.” Her criticism was echoed by cabinet colleague Simon Clarke but earned a reprimand from Trade Secretary Kemi Badenoch.

Badenoch said Braverman’s comments had been “inflammatory” as cabinet discipline disintegrated and Tory MPs questioned whether Truss could keep her top team unified on even basic messaging.

A foreign diplomat who also attended Labour’s conference in Liverpool last month said it like witnessing a total inversion in British politics. The main opposition party endured years of disarray under former leader Jeremy Corbyn, but now looks professional, disciplined and ready for government under Keir Starmer, the diplomat said. Labour also has a record lead in opinion polls.

At one drinks event, a business lobbyist opened their conversation with a Conservative MP by asking whether there was any point lobbying them — since they’d soon be out of power for the first time since 2010.

Meanwhile Truss’s embattled aides spent Tuesday night worrying if they could fill the auditorium for her speech on Wednesday, due to the number of Tory MPs staying away in protest, or who left early to avoid train strikes. In the end, the upper tier was closed to fill out the stalls for the cameras.

As the prime minister left Birmingham looking ahead to Parliament’s return after the weekend, the next rebellions were already starting to take shape, over welfare payments and immigration numbers. More broadly, though, even some Tory MPs — despite trailing Labour so far in the polls — said Truss does not have the mandate for the sweeping economic changes she’s proposing.

In the bar at the Hyatt, a certain gallows humor had taken hold by the final night. MPs recalled famous electoral wipeouts from history as they contemplated the scale of the possible defeat they face, their laughter regularly punctuated by the sound of breaking glass as drinks were knocked off ledges onto the marble floor.

Just wait till she gets back to Westminster, one MP said grimly.