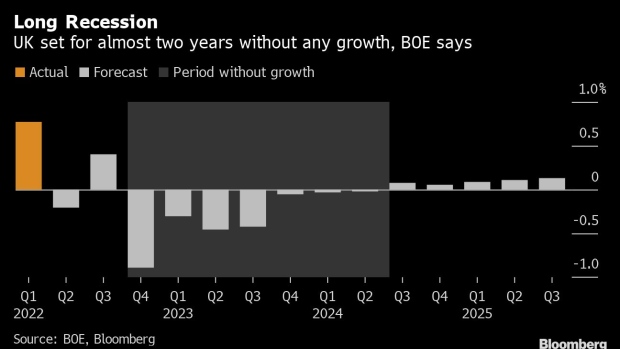 (Bloomberg) -- Liz Truss’s thoughts about how to manage the Bank of England are adding to a mounting list of threats to the value of the pound and UK government bonds.

The foreign secretary, who is leading in the race to replace Boris Johnson as prime minister, has stepped up calls for a review the central bank’s remit and potentially a new money supply target. While the remarks have been vague, analysts and investors are giving more thought to a risk that’s not yet priced into the market.

The worry is that Truss, if she takes office in September, may upend three-decade-long focus on fighting inflation and tell policy makers to use tools that were discredited in the 1980s. That’s adding to caution about the outlook for sterling and gilts, with the pound already suffering from questions about the health of the economy and the public finances.

“You’d see a sell off in gilts and a sell off in sterling too” if there was a change to the mandate, said Gordon Shannon, portfolio manager at TwentyFour Asset Management. “We aren’t taking it terribly seriously, but markets can be complacent about these things.”

Truss and her allies in the contest to lead the ruling Conservative Party have made the BOE a political punching bag, dragging Governor Andrew Bailey’s handling of the aftermath of the pandemic into the limelight.

They say the governor and his colleagues are partly to blame for inflation surging to a 40-year high, suggesting they were too slow to withdraw stimulus in place for the crisis and too gradual in their tightening of monetary policy since. The BOE expects price gains to leap above 13% this year, more than six times the 2% target.

Truss has said that these are “unprecedented economic times” and the “business as usual economic strategy” isn’t working.

Part of her solution, which also includes a radical shake up of how Covid debt is treated, includes a review of the BOE’s mandate. She hasn’t said she would scrap inflation targeting, but did mention the possibility of widening the target to include a measure of money supply or nominal gross domestic product.

It’s a line of attack that also reflects the danger facing the Tories and the fear that voters will lash out at a party that’s been in power for 12 years. That risk is exacerbated by the lack of action from Johnson’s government to help with the cost-of-living squeeze.

“What is potentially more concerning for gilt investors are the discussions around changing the BOE’s mandate and proposals to put the Covid-19 debt ‘on a longer-term footing,’” said Daniela Russell, head of UK rates strategy at HSBC Bank Plc. “If this causes investors to doubt the BOE’s credibility, then it could test appetite for gilts.”

For now, markets aren’t pricing in any major change for the BOE. The pound is swinging more with sentiment about inflation and strength of the US dollar, and gilts have rallied from a low in June. Truss’s campaign declined to comment beyond her public remarks.

Margaret Thatcher’s government in the 1980s tried tracking money supply -- the value of notes and coins in circulation plus bank deposits -- to tackle double-digit inflation. That both presented problems in measuring money supply and failed to manage the economy.

One concern about shifting back to a money supply target now is that Truss may be suggesting it as a way to loosen monetary policy and let the economy run hotter. While inflation is rising, money supply has been shrinking in recent months, pointing toward the risk of an economic contraction.

“The only reason we would go down this path is to create a framework that would boost the economy in the short term,” said Mark Dowding, chief investment officer at BlueBay Asset Management. He said that would produce “a short-term and starry-eyed booster strategy -- a desire to prop up growth now, deflecting the pain to later.”

Shannon suggested moving to a money supply target would be like “throwing away newer technology” in favor of an older one.” Kevin Hollinrake, a Conservative member of Parliament who supports Truss, believes following such a path could “lose control of inflation.”

“Having a completely different approach, a radical approach, a risky approach, I think is absolutely potentially disastrous,” said Hollinrake. “It sounds to me like somebody’s got the bee in their bonnet about the money supply.”

Proponents of money supply have gained prominence with the ascent of Truss. The economist Tim Congdon, who advised Thatcher, predicted the latest inflation spike early on after seeing broad money growth rocket 15% at the start of the pandemic.

“It’s based on theory, it anchors with facts, and it works,” Congdon said, adding that a a nominal GDP target would not be successful.

Nevertheless, mainstream investors are unsettled about the prospects of ripping up the BOE’s institutional framework, which has been in place since 1997 when Tony Blair’s Labour government handed the bank authority to set interest rates.

The prospects for the UK have dimmed in recent months, with the BOE forecasting a long recession stretching into 2024 and inflation remaining elevated well into next year. Natural gas prices have doubled since the start of the year, and border friction with the EU have reduced trade.

“There’s been an outflow from UK assets broadly since Brexit, so I think this would be another leg down in confidence that investors have in the UK and UK assets,” Grace Peters, head of EMEA investment strategy at JPMorgan Chase Bank in London, said on Bloomberg Radio.

Bailey and his colleagues have avoided the debate, saying the strength of the UK system is the BOE’s independence to act but noting that the remit is a matter for the government.

Shifting the BOE’s goal posts in the middle of an inflation crisis, which is squeezing consumer incomes at the tightest pace in two decades, would add to those headaches.

“A new risk premium would be built into UK bond prices, and yields would rise,” said Tony Yates, a former senior adviser at the BOE. “Inflation uncertainty would also rise. I’m disappointed to see this idea excavated. It sounds like something dredged up from reading history and taking from the era of Thatcher.”