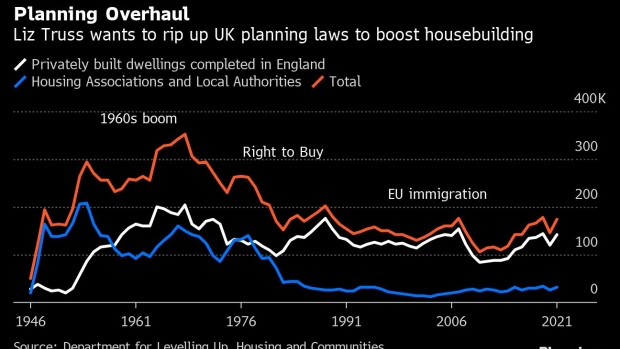 (Bloomberg) -- Liz Truss’s fiscal plans have already turned investors against her and handed the Labour Party a massive lead in opinion polls. Things could get more serious for the new UK prime minister as her core voters absorb the impact of her policies.

The savage market reaction triggered by her promise of huge unfunded tax cuts is cascading through the real economy, with key Conservative constituencies like pensioners and homeowners facing a battering as a result. That will test the loyalty of the party faithful who delivered Truss to power less than a month ago and gather in Birmingham from Sunday for their annual conference.

Stocks slumped and the pound hit record lows, destroying wealth and making foreign goods and travel more expensive, while higher immigration and planning reform risk infuriating traditional Tories. It spells danger for a divisive prime minister who has still to convince her party’s lawmakers she has what it takes to lead.

Here’s how the fallout will hit the Conservatives base:

Pensioners are a core constituency for Truss, with polls suggesting the last election saw 57% of those between 60 and 69 and 67% of people over 70 back the party. For every 10 years a person ages, their chance of voting Tory increases by about nine points.

That makes the risks to pension funds, sparked by the surge in longer-term gilt yields that followed the fiscal statement, all the more damaging for Truss. While the Bank of England eventually stepped in to prevent a deeper crisis, the accusation that the prime minister put pensions at risks with her policies may be a hard one to shake.

Read More: The Pension Problem That Threatened to Wreck the Gilt Market

As well as sparking the gilt market selloff, the tax giveaway has also increased bets the BOE will have to push against the stimulus by hiking borrowing costs at a faster pace, with traders now pricing in rates of around 6% next year.

That’s sparking havoc in the mortgage market, pushing up rates and forcing lenders to pull more than 1,600 mortgage products since Friday, the equivalent of 40% of the market, according to Moneyfacts Group Plc. The cost of a two-year fixed-rate mortgage on an average-priced home will rise to about £1,350 ($1,500) by March from about £780 at the start of this year, according to Niraj Shah, an economist at Bloomberg Economics.

That poses a problem for a party that has long talked up the virtues of owning a home. In 2019, the majority of owner-occupiers voted Tory, while YouGov polling suggests most voters with an opinion think the party is close to homeowners.

The mortgage turmoil will be particularly harmful if it also filters through to house prices. There are already signs the surge in prices that followed the pandemic is abating, with Nationwide reporting that values stagnated for the first time in more than a year last month. Thing could be about to get a whole lot worse, with analysts at Credit Suisse saying that house prices “could easily fall 10% to 15%.”

The chaos has also hurt UK stocks, potentially reducing the value of the personal portfolios of wealthier voters. The FTSE 350 index is down more than 2% this week, taking its monthly loss to about 6%, the second-worst decline since the Covid pandemic.

Building Over the Countryside

They may not have captured the headlines amid the market turmoil, but other plans from the Truss government could also upset her voters. A pledge to tear up planning rules threatens to reawaken fears that the fields and woodlands of England will be sacrificed for houses and that was one of the factors behind a stunning by-election defeat to the Liberal Democrats in 2021.

A move to boost economic growth and ease hiring difficulties with higher immigration may upset some of those on the right of the party and those who backed Brexit in order to clamp down on arrivals from outside the country.