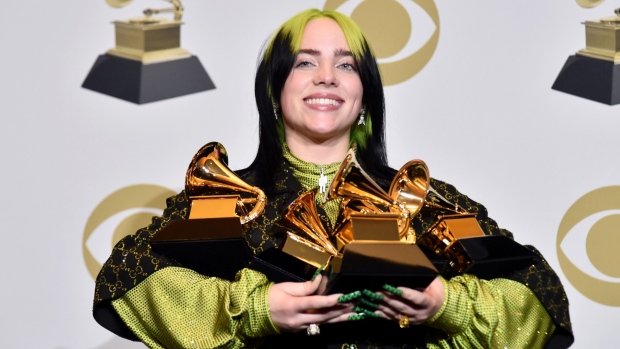 Billie Eilish, an 18-year-old singer-songwriter from Los Angeles, swept the top four prizes at Sunday’s Grammy Awards, becoming the first artist to do so in 39 years, during a ceremony overshadowed by a Recording Academy scandal and the sudden death of basketball star Kobe Bryant.

A black-and-green clad Eilish captured five prizes in total, including record, song and album of the year, as well as best new artist. The youngest artist to win album of the year in Grammy history, Eilish accepted the awards with her brother, Finneas O’Connell, who also won a pair of statuettes as a producer and for engineering her music.

“We made this album in a bedroom in the house we grew up in, and it was mastered in someone’s living room,” Eilish said. “Anything is possible.”

The Grammys audience has declined over the years, but the awards can still deliver a sales bump to winning artists. It’s also a valuable showcase for the stars who perform during the telecast. The songs featured on last year’s Grammys saw a 480% increase in digital-download sales, according to Billboard.

Last night’s broadcast drew 18.7 million viewers, according to CBS, which hosted the program. That was down about 6% from 2019.

The music business’s transition from physical albums to digital distribution was painful -- industrywide revenue is still only about half what it once was -- but it means fans can reward winning artists immediately. The Grammys are more influential than other award shows in terms of instantly swinging the fortunes of artists and their work.

Oddsmakers favored Eilish headed into the ceremony. She was given the best chance of winning three of the four general categories, as well as a couple of pop prizes.

Still, Eilish seemed genuinely caught off guard by her victories, suggesting that Ariana Grande deserved the prize for album of the year. She offered no speech for record of the year beyond a thank you.

The Los Angeles native began writing songs at the age of 11, collaborating with her brother. She released a handful of songs between 2015 and 2018, and in 2019 put out her debut album, “When We All Fall Asleep, Where Do We Go?” The album was the year’s second-biggest hit, outselling established pop stars Taylor Swift and Ariana Grande, according to Nielsen. And five of its songs ended up ranking among the year’s 100 biggest tracks.

“We wrote an album about depression and suicidal thoughts and climate change,” O’Connell said. “We stand up here confused and grateful.”

Eilish’s strongest competitor was expected to be Lizzo, the 31-year-old who was also up for all four of the general prizes. Lizzo’s music defies conventions of genre. Though initially labeled a rapper, her songs were nominated in three different genres: R&B, pop and urban contemporary.

Lizzo earned three prizes, and edged out Eilish for the first award of Sunday’s telecast -- best pop solo performance. Her rise to the top of the music industry was slow, and then very, very fast. A classically trained flautist, Lizzo toiled in the Minneapolis independent music scene for several years before signing to Atlantic Records in 2016. Her next few singles garnered some listeners, but she remained a darling of critics more than the mainstream.

The dominance of young artists at the Grammys reflects how social media and streaming have affected stardom. It is easier than ever for musicians to get their music released and to communicate with fans. While the sheer volume of new music makes it harder for anyone to break out, the ubiquity of Spotify, Instagram, YouTube and TikTok means that an act can go from anonymity to global stardom in less than a year.

Lil Nas X, who won two prizes Sunday, recorded his first song just a couple years ago. Lizzo’s “Truth Hurts,” first released in 2017, received a huge boost from TikTok and the film “Someone Great.” It was added to the deluxe version of her album and became the No. 1 song in the U.S. two years after its release.

Lizzo also performed the first songs of the night, which she dedicated to Bryant’s memory.

The specter of Bryant hung over the show. The Los Angeles Lakers star -- killed in a helicopter crash on Sunday -- played in the same arena, Staples Center, where the Grammys were held. Grammy performers featured his jersey in their staging, while hundreds of fans in Laker jerseys congregated outside the arena.

“We are literally standing here heartbroken in the house that Kobe Bryant built,” said host Alicia Keys. The 15-time Grammy winner emceed the event for the second year in a row, replacing a long line of comedian hosts.

She drew the unenviable task of balancing a celebration of the year’s best music with the sadness of Bryant’s death and a recent scandal involving the Recording Academy, the body that gives out the awards.

The Academy’s chief executive officer, Deborah Dugan, was ousted in January less than a year after taking over for allegedly mistreating a subordinate. She then sued the organization and accused it of fostering corruption and sexual harassment.

Dugan was hired, at least in part, to clean house after her predecessor, Neil Portnow, told women to “step up” if they wanted to receive more nominations and more slots to perform during the Grammys. That comment was widely criticized by artists, including Pink.

The Grammys have been criticized for not keeping up with the times, especially in terms of recognizing women or people of color. While hip-hop has displaced rock as the defining musical genre of culture in the U.S. and abroad, no hip-hop act has won album of the year since Outkast in 2003.

In past years, the Recording Academy handed album of the year to aging rockers (Steely Dan and U2), jazz pianists (Herbie Hancock) and country (Alison Krauss) over a new guard of artists like Eminem, Amy Winehouse, Kanye West and Lil Wayne.

But the organization has welcomed new members, aiming to inject more diversity and youth into its voting body. Even so, it still elects nominations through an opaque process involving committees.

Winners made little mention of the controversy in their speeches, though pop star Dua Lipa did call on industry executives to hire and work with more women. Keys touched on it indirectly, urging a shift to “to realness and inclusivity.”

But the musician summed up the sentiments of everyone in the building with an expression of exhaustion.