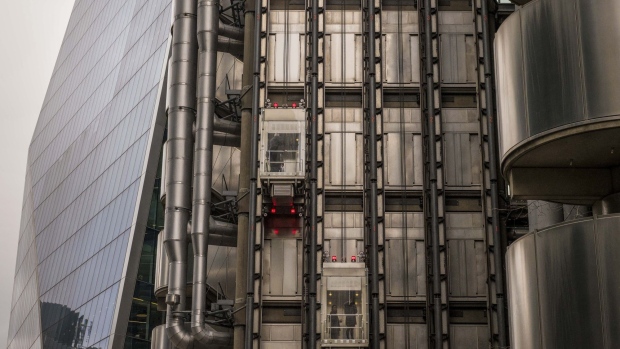 The Lloyds of London building in the City of London, U.K. Photographer: Jason Alden/Bloomberg , Bloomberg

(Bloomberg) -- Lloyd’s of London is calling for the creation of new insurance policies and government-backed funds to protect against future pandemics and global threats.

The world’s largest insurance market proposed a new type of policy that would cover revenue lost during a lockdown when businesses are ordered to close, according to a company report published on Wednesday. AXA SA and Hiscox Ltd. are among insurers facing mounting Covid-related claims for lost income.

Lloyd’s also pushed for governments to back funds that would help protect insurers against a wave of claims during events such as a major public health emergency or telecommunications failure, according to the paper.

Insurance executives across Europe and the U.S. have been brainstorming ideas to protect against future shocks after Covid-19 led to lockdowns and the biggest slump in global output since the Great Depression. The firm is committing 15 million pounds ($18.6 million) to finding solutions after the coronavirus outbreak hit insurers hard. Lloyd’s in May estimated the total hit to insurers will be a record $203 billion.

Disputes over coverage have led some policyholders to take legal action against their insurers. AXA agreed this week to cover losses sustained by several hundred French restaurants during the lockdown after the insurer lost a lawsuit brought by a policyholder. In the U.K., the financial-markets regulator has brought a test case to London’s High Court seeking clarity on the limits of business-interruption insurance.

Lloyd’s has received about 30,000 claims related to the outbreak, and about one third of these have been settled, Chief Executive Officer John Neal said in an interview on June 30.

Several European countries have already stepped in to support credit insurance markets for businesses and suppliers, while insurance firms have withheld dividends and raised fresh capital as a wave of claims from stricken businesses arrive.