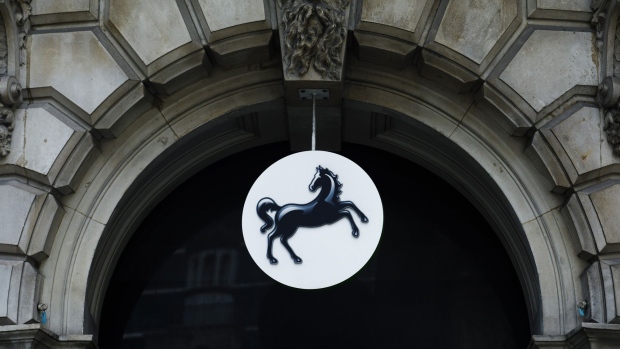 A sign above the entrance to a Lloyds Banking Group Plc bank branch in London, U.K., on Friday, Oct. 22, 2021. The leaders of Europe's top banks agree they have a lot riding on the recent surge in consumer prices. Photographer: Luke MacGregor/Bloomberg , Bloomberg

Lloyds Banking Group Plc posted a better than expected pretax profit in the third quarter and lifted its outlook as the lender benefits from the rebounding U.K. economy.

Profit at Britain’s biggest mortgage lender almost doubled to 2 billion pounds ($2.7 billion), ahead of analyst expectations for 1.4 billion pounds, according to a consensus compiled by Bloomberg. The bank released 84 million pounds from its provisions for bad loans and said impairments will be a net credit over the year, in a sign that borrowers are coping well after the pandemic.

“As we move into the final quarter of 2021, the board, group executive committee and I are developing the next evolution of our strategy and longer-term priorities,” said Charlie Nunn in his first earnings since becoming chief executive officer in August.

As part of its improved outlook, Lloyds said net interest margin will be modestly above 250 basis points this year, while return on tangible equity will be over 10%.

The buoyant housing market continued to fuel growth in Lloyds’ loans and advances, which were up 2.8 billion pounds to 450.5 billion pounds in the quarter.

Lloyds isn’t alone in taking advantage of Britain’s return to growth after more than a year of Covid-19 restrictions. Barclays Plc more than doubled pretax profit at its domestic unit as lending improved and impairments decreased. CEO Jes Staley said that consumer spending was now above levels seen before the pandemic.

Lloyds also took a further 100 million-pound charge for remediation, including more to compensate victims of the HBOS Reading fraud.