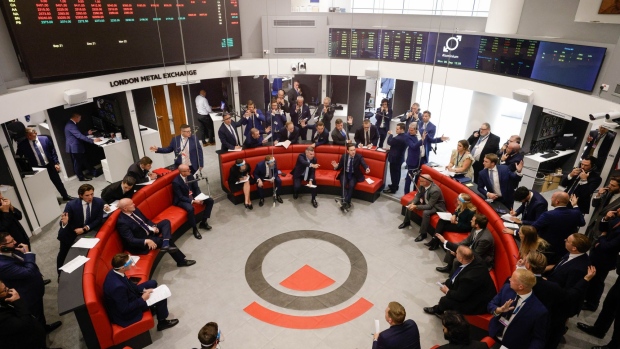 Traders on the trading floor of the open outcry pit at the London Metal Exchange Ltd. (LME) in London, U.K., on Monday, Sept. 6, 2021. After 18 months away, brokers returned Monday to the red leather couches of the London Metal Exchange’s floor, where they set benchmark prices of metals such as copper and aluminum by screaming orders at one another. , Bloomberg

(Bloomberg) -- The London Metal Exchange has attracted takeover interest from rivals as the historic institution wrestles with its future in the wake of March’s nickel crisis.

Intercontinental Exchange Inc. made an approach to buy the LME earlier this year from owner Hong Kong Exchanges & Clearing Ltd., according to people familiar with the matter. While ICE was rebuffed it may try again in the future, said the people, who asked not to be identified discussing private information. CME Group Inc. doesn’t believe the LME is for sale and is focusing on its own metals business, but it may be interested in bidding for the LME in the future, said people familiar with its thinking.

The 145-year-old LME is still wading through the fallout from the massive nickel short squeeze, which the exchange has said could have posed a risk to the wider financial system if it hadn’t taken the controversial step of suspending the market and canceling billions of dollars of trades. The LME is now facing regulatory investigations, as well as lawsuits from investors, and its nickel market has yet to return to normal.

Yet while the crisis has thrown the LME’s future into question, it remains a vital cog at the center of the metals trade as the home of global benchmark prices for some of the world’s key industrial commodities.

ICE remains interested in the LME and may make another attempt in the future as the outcome of the investigations and lawsuits over the nickel crisis becomes clearer, one of the people said.

The LME has said it intends to publish the conclusions of an independent investigation into the nickel crisis this month, while the Financial Conduct Authority and Bank of England are also conducting reviews. Meanwhile, Elliott Investment Management and Jane Street are together seeking $471 million in damages from the exchange, and a group of other hedge funds and proprietary traders is also taking legal action that could be a prelude to further claims.

Spokespeople for HKEX, ICE and CME all declined to comment.

It was ICE that kicked off a bidding war for the LME just over a decade ago with an unsolicited approach to the LME – then owned by its members – that ended with the metals exchange being sold to HKEX for $2.2 billion.

Under Chief Executive Officer Jeff Sprecher, ICE has led the consolidation of the exchanges industry over the past two decades, with acquisitions including London’s International Petroleum Exchange, the New York Board of Trade and NYSE Euronext.

It’s far from clear whether HKEX would be willing to sell the LME, even if the nickel lawsuits go against it. A sale would be an embarrassing retreat ten years after former CEO Charles Li trumpeted the acquisition of the LME as an opportunity to bring together the historic exchange with HKEX’s China expertise.

Asked if he would consider selling the LME, HKEX CEO Nicolas Aguzin told Bloomberg TV in October: “A lot of the manufacturers and producers of some of these base metals are in China. There is a natural fit in terms of the connectivity. The key thing is how do we get the most out of that advantage of being uniquely positioned as HKEX as part of China? That’s what we have to focus on.”

--With assistance from Kiuyan Wong and Mark Burton.