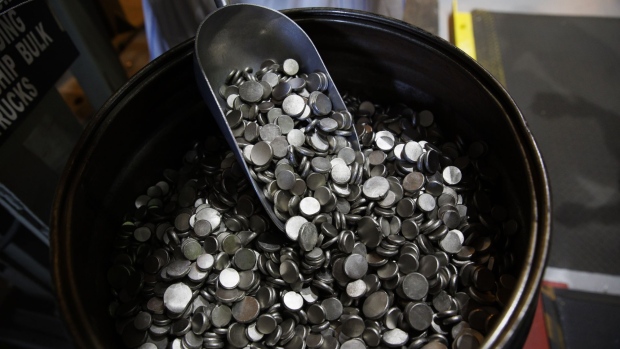 Nickel chips ready for shipment at the Vale Copper Cliff mine in Sudbury, Ontario, Canada, on Wednesday, June 1, 2022. Nickel is the key ingredient in the stainless steel used in everyday appliances, but it's also critical for the transition away from fossil fuels, since it's used in the batteries automakers need to electrify the world’s car fleet. , Bloomberg

(Bloomberg) -- The London Metal Exchange has defended its controversial decision to cancel billions of dollars of nickel trades in March as necessary to avoid a $20 billion margin call that would have sent the market into a “death spiral” and threatened the exchange’s own survival.

The LME on Monday provided its most detailed account yet of the historic short squeeze this year when prices soared 250% in little over 24 hours, in a filing outlining its defense against lawsuits from Elliott Investment Management and Jane Street.

The document -- which describes a growing sense of panic and mounting defaults among members well before the worst of the spike -- describes why the LME took the unprecedented decision to unwind hours worth of trading, but may also reignite questions from its critics about why it didn’t act sooner.

Read: The 18 Minutes of Trading Chaos That Broke the Nickel Market

If the prices reached during the canceled trading on March 8 had been allowed to stand, the nickel market would have faced a margin call of $19.75 billion, ten times higher than the previous record level, the exchange said. At least seven clearing members would have gone into default, and the crisis had the potential to create a “death spiral,” according to Adrian Farnham, the chief executive officer of the LME’s clearinghouse at the time.

In that scenario, LME Clear would have incurred a loss of $2.6 billion, and would have had to seek contributions of at least $1.22 billion from the remaining clearing members. That in turn would probably have caused a further five clearing members to default, the LME said in the filing, “resulting in the LME being unable to function as a venue for non-ferrous metals markets, and posing a significant systemic risk to the wider financial system.”

Elliott and Jane Street are seeking a total of nearly $500 million in damages from the LME and its clearinghouse, arguing that the exchange acted improperly in its decision to cancel the March 8 trades.

“The LME maintains that Elliott’s and Jane Street’s grounds for complaint have no merit and are based on a fundamental misunderstanding of the situation on 8 March and the decisions taken by the LME,” an LME spokesperson said. “All the actions taken on 8 March were lawful and made in the interest of the market as a whole. The LME will continue to vigorously defend these proceedings.”

The LME’s defense reveals how much stress the market was under even on March 7, the day before the market was suspended, when prices rose 66%. Three members missed initial margin calls that were due for payment by 9 a.m. that day, and one remained unpaid, according to the LME.

Yet when the LME’s special committee held a call at 4 p.m. on March 7, it concluded that the market was still orderly, and allowed it to reopen as usual the following night at 1 a.m.

At 5:53 a.m. on March 8, Farnham was informed that six members had not made overnight margin payments worth $2 billion -- or one third of the total due -- that were due by 9 a.m. Between 5:33 a.m. and 8:18 a.m., seven members approached the LME to say that they would have difficulty posting margin.

At about 7:30 a.m., LME and LME Clear executives held a call at which they agreed that the market had become disorderly and decided to suspend trading. At 9 a.m., a further call was held at which the decision was taken to cancel all trades that had taken place on March 8.

Responding to the suggestion that it had acted to favor Tsingshan Holding Group Co., whose massive short position was the focus of the nickel market squeeze, the LME said it had not known about the situation.