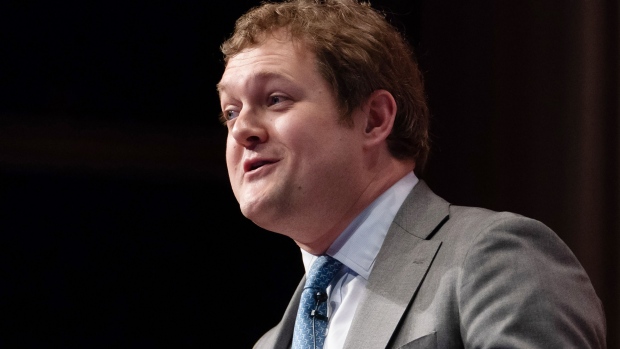 Traders, brokers and clerks on the trading floor of the open outcry pit at the London Metal Exchange Ltd. (LME) in London, U.K., on Monday, Feb. 28, 2022. The turmoil unleashed in commodity markets by Russia's invasion of Ukraine worsened on Monday as LNG orders were paused, finance for trade in raw materials dried up and Black Sea wheat sales froze. , Bloomberg

(Bloomberg) -- The London Metal Exchange plans to force members to regularly report details of their over-the-counter metals positions, substantially expanding its market surveillance capabilities in the wake of this year’s nickel squeeze.

The LME has already imposed emergency limits on daily price moves to prevent a repeat of the 250% spike in nickel prices seen in March, and is now looking to expand its oversight of the bilateral deals agreed between dealers and their clients.

The opacity of OTC markets in commodities trading has come under growing focus following the nickel crisis on the LME, and as wild price swings more broadly result in huge margin calls across the sector. There’s also been an increase in calls this year for regulators to look more closely at commodities markets and the risks they pose to the wider financial system.

The nickel squeeze in March was centered around a large short position amassed by entrepreneur Xiang Guangda, whose Tsingshan Holding Group Co. is the world’s biggest nickel and stainless steel company. The vast majority of his position was held in OTC positions with banks, and the LME has said it had no visibility of the large off-exchange position prior to March 8, when it suspended trading in response to spiking prices.

The exchange has been harshly criticized for allowing the market to open at all that day and then canceling billions of dollars of trades at the highest prices.

“If we had had data about a very large OTC position, that would have at the very least entered into our thinking in considering what to do, based on the price movement on the Monday,” Chief Executive Officer Matthew Chamberlain said by phone. “Had we understood that it reflected a very specific effect in the market caused by this large position, then I think the decision could have been different.”

The LME is proposing the introduction of a revised requirement for members to report all OTC positions in its main metals on a weekly basis, it said in a notice on Friday. The plan is subject to two weeks of consultation with members -- a shorter-than-usual period which reflects “urgent need to ensure that it has a clear understanding of activity,” it said.

“Recent events in the LME nickel market have demonstrated the effects that OTC activity can have on the wider LME market,” it said.

Members have resisted similar moves in the past -- Chamberlain said in March that banks bore some responsibility for the conditions that led to the massive short squeeze because they lobbied against efforts to increase transparency.

The LME’s U.K. regulators, the Financial Conduct Authority and Bank of England, said last month they will undertake reviews into the exchange’s governance, market oversight and risk management following the nickel squeeze. The LME will also appoint an independent party to conduct its own review of events.