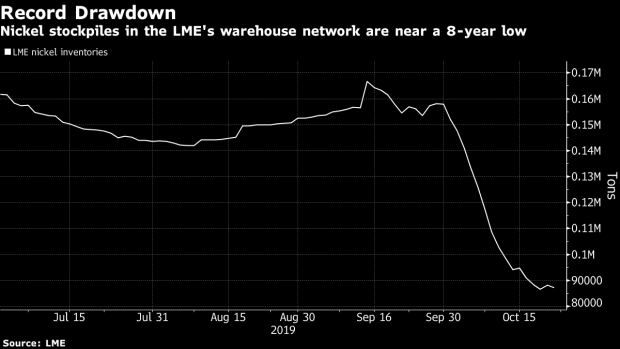 (Bloomberg) -- The London Metal Exchange is reviewing recent trading in the nickel market following the biggest-ever decline in inventories.

The exchange sent an email to members asking for more details of “significant client activity” in nickel warrants since Sept. 1. The LME also asked members to identify the client and business reason for the transactions, as well as steps taken to “ensure that the client’s activity is not conducive to an abusive squeeze or other pattern of market abuse/disorderly market conduct.”

The LME may open a formal investigation into the issue if it finds evidence of potential wrongdoing, said a person familiar with the matter, who asked not to be identified.

The nickel market has been rocked since early September, when Indonesia confirmed plans to bring forward a ban on exports of raw nickel ore, triggering worries about a supply crisis.

Since mid-September, about half of all the nickel in LME warehouses has been withdrawn and spot contracts have traded at the biggest premium to futures in 12 years, in a condition known as backwardation. The market flipped back into contango this week.

“We are actively monitoring the nickel market and collecting additional holistic data in respect of member and client activity,” the LME said in a statement to Bloomberg News. “While we note that market tightness may be reflective of genuine physical market conditions, we also have clear and robust procedures in place to ensure that any evidence of misconduct will result in disciplinary proceedings.”

In the email to members, the LME also asked for details about procedures that traders use to “manage conflict during this period of nickel tightness.”

China’s Tsingshan Holding Group Co. was one of the main forces behind a record drawdown in LME nickel inventories in early October, according to people familiar with the matter. Tsingshan was working with financing banks including JPMorgan Chase & Co. to take the metal off the exchange, the people said. Estimates for how much they bought range from 30,000 to 80,000 tons.

(Updates with chart of LME inventories, background on the nickel market.)

--With assistance from Alfred Cang.

To contact the reporters on this story: Andy Hoffman in Geneva at ahoffman31@bloomberg.net;Mark Burton in London at mburton51@bloomberg.net