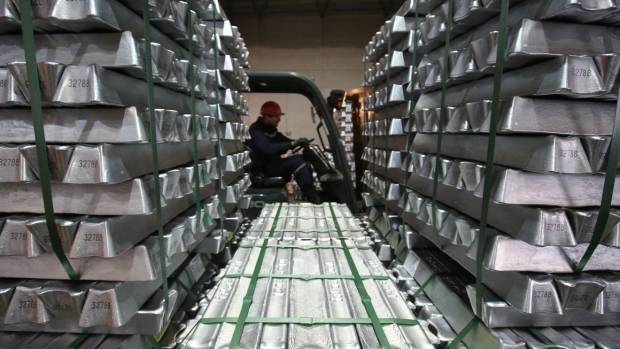 (Bloomberg) -- The London Metal Exchange is launching a discussion paper that marks the first step toward a potential ban on new supplies of Russian metal, according to people familiar with the matter.

Any move by the LME to block Russian supplies could have significant ramifications for the global metals markets, as the country is a major producer of aluminum, nickel and copper. Fears that sanctions could disrupt Russian nickel exports helped trigger a massive short squeeze on the LME in March.

The 145-year-old exchange plans to initiate a discussion on whether and under what circumstances it should block new supplies of Russian metal from being delivered to its network of warehouses, the people said, asking not to be named as the plans aren’t yet public.

Launching a discussion paper doesn’t mean the LME has made any decisions about what it will do, but the move marks a shift in approach. The exchange had previously said it did not plan to take any action outside the scope of sanctions, which have for the most part left large Russian metal producers like United Co. Rusal International PJSC and MMC Norilsk Nickel PJSC untouched.

Base metals including aluminum and nickel jumped after Bloomberg reported the bourse’s plans for a discussion paper on a potential ban. Aluminum rose as much as 8.5%, the biggest intraday jump on record, before paring gains to trade up 2.8% at $2,183 a ton on the LME as of 3:38 p.m. in London. Nickel advanced 2.6% and zinc gained 2%.

In a notice to members after Bloomberg reported the plans, LME Chief Executive Officer Matthew Chamberlain confirmed that the exchange was considering issuing a discussion paper “with the aim of eliciting market views as to the ongoing acceptability of Russian metal in the broader physical market.”

He said no decision yet had been taken on whether to issue the discussion paper, and if the LME did proceed it would assess the feedback it received. That paper could lay out potential options, including taking no action.

The change in the LME’s stance towards Russian metal reflects a shift in the broader metals industry, the people said.

Soon after Russia’s invasion of Ukraine, the LME’s copper committee -- a group of industry representatives that plays an advisory role -- voted to recommend banning new supplies of Russian metal. At the time, advisory groups for other metals were against the idea.

However, in recent meetings the balance has shifted more in favor of blocking Russian supplies, with the LME’s aluminum committee also broadly backing the move, the people said.

What’s more, in recent months large metal consumers in Europe have said they’ll avoid Russian metal as they negotiate annual supply contracts for next year, raising the prospect that unsold Russian metal could be dumped on the exchange. Bloomberg reported last week that Rusal was working on a plan to deliver some aluminum directly to LME warehouses in Asia.

While producers typically sell directly to metal consumers and traders, the fact that their metal can be delivered on the LME is an important backstop that underpins demand and helps buyers secure financing. Any move to block Russian supplies from being delivered against LME contracts would hurt producers like Rusal and Nornickel. It would also likely be a headache for Glencore Plc, which buys millions of tons of aluminum from Rusal under a huge multiyear contract.

As such, it would almost certainly prove contentious, potentially exposing the LME to legal challenges from Russian producers. The exchange is already the target of legal action from hedge funds and trading firms over its decision to cancel billions of dollars in nickel trades earlier this year when prices spiked.