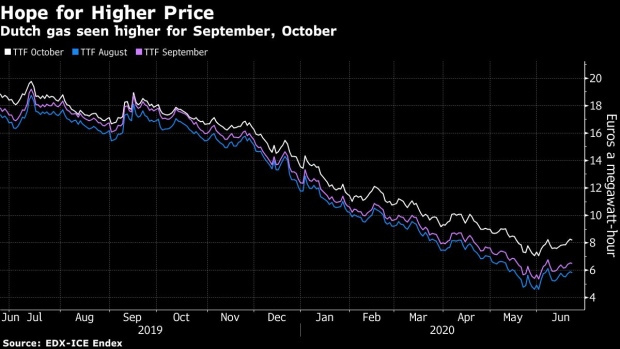 Liquid natural gas (LNG) silos stand on the shoreline at the Port of Rotterdam in Rotterdam, Netherlands, on Wednesday, Sept. 4, 2019. The first cargo of liquefied natural gas has set sail from a $15 billion Texas export terminal, amplifying America’s growing influence on the global market for the fuel. Photographer: Geert Vanden Wijngaert/Bloomberg , Bloomberg

(Bloomberg) -- Buyers of U.S. liquefied natural gas will probably cancel fewer shipments scheduled for August than they do for July as prices show signs of recovery, according to traders.

Cheniere Energy Inc., the nation’s biggest producer of LNG, received requests from buyers to forgo 16-23 cargoes for August, according to a person with knowledge of the matter.

Traders surveyed by Bloomberg News speculated that cancellations from all U.S. terminals could total between 25-45 cargoes for August. The final figure is likely to be fewer than those for July, when 35-45 loadings are expected to be canceled, they said.

The potential drop in canceled cargoes may signal that the global LNG market is starting to recover from the Covid-19 pandemic, which has hammered demand in an already oversupplied space. While the market is still struggling with a glut, price differences between the main U.S., Europe and Asia trading regions have started to recover ahead of next winter.

Requests have been made to cancel shipments from both the Sabine Pass and Corpus Christi terminals in the Gulf Coast, said the person, who asked not to be identified as the information isn’t public. Cheniere offers customers the option to cancel cargoes, though buyers needed to provide notice by June 20 to not take August loads and they still have to pay processing costs.

Cheniere’s trading arm, which is slated to take about 9 cargoes for August, hasn’t decided yet whether to skip those shipments, the person added.

“The flexibility inherent in our LNG contracts -- destination flexibility and the option to not lift cargoes, but pay the liquefaction fee -- helps our customers effectively manage their energy portfolios through market cycles, while still providing Cheniere with reliable cash flow,” Eben Burnham-Snyder, a spokesman for Cheniere, said by email.

Natural gas prices in Europe and Asia must be above Henry Hub, the U.S. benchmark, by a certain amount to justify shipping to those regions. While the 18-cent premium of Europe’s TTF marker is still largely uneconomical for August-loading shipments, the situation is an improvement when compared to July’s 38-cent discount, traders said.

Henry Hub has slid since May, “and we have seen increased freight inquiries for shipping out of the U.S. in August to assess whether it makes sense to ship or cancel,” said Oystein Kalleklev, chief executive officer at tanker owner Flex LNG Ltd. in Oslo. “So expect slightly higher lifting in August versus July as charters can then load and float a month for selling into October.” The heating season begins in that month for most regions, and prices would be expected to rise.

It is only from September 2021 that significant positive cash margins reemerge, but even with expected neutral cash margins, U.S. cargo cancellations are expected to disappear or diminish significantly, Graeme Wildgoose, manager for LNG and gas consulting for Europe, Middle East and Africa at Poten & Partners, said in a webinar last week.

“The natural tendency of off-takers is likely to be to take the LNG, accept the risk of the cargo and hope that the prices will improve,” he said.

(Updates with details about Cheniere’s trading arm in the sixth paragraph.)