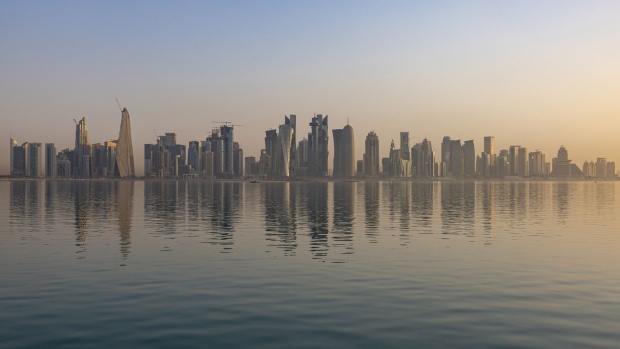 Residential and commercial skyscrapers on the skyline in Doha, Qatar, on Thursday, June 23, 2022. About 1.5 million fans, a little more than half the population of Qatar, are expected to descend upon the tiny Gulf state for this year's FIFA World Cup football tournament. , Bloomberg

Soaring energy revenues propelled a 12-fold jump in Qatar’s budget surplus to 47.3 billion riyals ($12.8 billion) in the first half of 2022, data showed, boosting the fortunes of one of the world’s richest nations.

Oil and gas revenue surged 58% to 150.7 billion riyals during the period, offsetting increased government spending on wages and salaries. The country’s surplus in the first six months of 2021 stood at 4 billion riyals.

Like other Gulf energy producers, Qatar has benefited from soaring oil and gas prices caused by the Covid-19 recovery and Russia’s war in Ukraine. The country is preparing to host this year’s soccer World Cup.

Its revenues are generated chiefly by long-term contracts to supply liquefied natural gas, agreements that are typically tied to the price of oil. Europe’s interest in diversifying its gas supply away from Russia stands to benefit Qatar in the long-term, as the Gulf country tries to tie up buyers for new LNG production later this decade.

The International Monetary Fund projects the country’s economy will grow 5.4% this year and generate a surplus equivalent to about $45 billion. Outside energy revenues, World Cup organizers have said they’re also anticipating a $17 billion boost from hosting the soccer tournament.