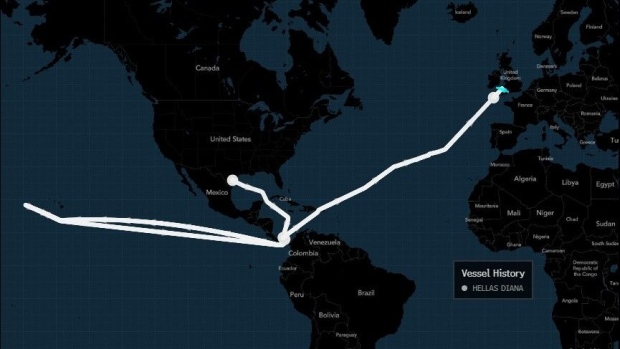 After nearly two months at sea and a dramatic reversal near the Hawaiian islands, the Malta-flagged liquefied natural gas tanker Hellas Diana has declared Milford Haven in the energy-starved United Kingdom as the final destination for a U.S. LNG cargo the ship is carrying, shipping data compiled by Bloomberg shows. , via Bloomberg

(Bloomberg) -- After nearly two months at sea and a dramatic U-turn near the Hawaiian islands, the Hellas Diana tanker carrying U.S. liquefied natural gas has declared the U.K. as its destination, shipping data compiled by Bloomberg show.

The LNG tanker’s seemingly haphazard voyage underscores how high natural gas prices in Europe this winter continue to draw cargoes away from more traditional seasonal markets in Asia. Europe, where inventories are low and major supplier Russia has not delivered as promised, last month saw benchmark gas futures trade as much as $24 per million British thermal units higher than those in Asia.

The Malta-flagged tanker left Cheniere Energy’s Corpus Christi LNG on the U.S. Gulf Coast on Nov. 28, crossed through the Panama Canal and was on a path to Asia when it abruptly turned around on Dec. 20. The tanker crossed through the canal a second time and crossed the Atlantic Ocean to European waters where it’s expected to dock at Milford Haven on Wednesday.

The voyage took seven weeks, almost enough to go to Asia from the U.S. Gulf Coast and back. U.S. LNG cargoes typically take about four weeks to reach destinations in Asia and two weeks to reach most ports in Europe.

European natural gas prices rose so much and shipping rates to the energy-starved continent are so low that the long voyage would still be profitable even after paying as much as an estimated $950,000 in tolls to transit the Panama Canal twice, said Hadrien Collineau, an LNG industry analyst with the London office of consultancy firm Energy Aspects.

More recently, the difference in prices between Europe and Asia has narrowed significantly, but the lower shipping costs to cross the Atlantic still make it a more attractive market for U.S. cargoes.

“Under the latest forward curves, most flexible cargoes globally still have the incentive to go to Europe,” Collineau said.