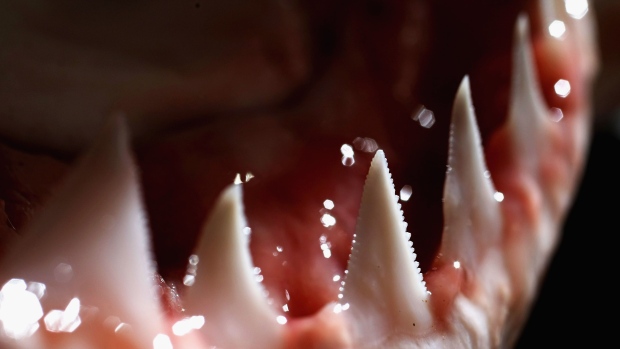 An important part of the ecosystem , Photographer: Ian Waldie/Getty Images

(Bloomberg Opinion) -- Hear the term “loan shark” and what do you think of? Probably a desperate borrower going to Tony Soprano and, later on, having his legs broken for paying late. No doubt that occurs. But as I press my first-year contracts students to understand, those who lend money to the poor, even at extravagant rates of interest, fill a market niche. Just like everybody else, people with bad credit want to borrow money. And because capital markets are effectively closed to them, they have to turn to unregulated lenders.

The trouble has long been that we lack good data on whether their typical borrowing experience involves repayment (admittedly at exorbitant rates) or some version of those broken legs. Happily, that gap has been filled. A new NBER paper by economists Kevin Lang, Kaiwen Leong, Huailu Li and Haibo Xu offers a picture of how the sector works in practice. The authors studied roughly 100,000 loans made to some 1,000 borrowers by unlicensed lenders in Singapore.

The authors find that the typical borrower borrows frequently, and fully understands the structure of the deal.(1) A typical contract involves “six payments, each equal to 20% of the nominal loan amount,” a scheme that yields an interest rate of either 8% a week or 5.5% a week, depending on whether the first payment is credited against the principal. The majority of the loans are not paid on time, a failure for which the usual penalty is additional interest on late payments.

But let’s not jump to the paternalistic assumption that the borrowers are deluding themselves. The authors tell us that the borrowers generally understand what they are getting into. They know the odds are that they will not repay on time; they know that this failure will make the loan more expensive.

Let’s remember why people go to loan sharks in the first place. Regulated lenders won’t serve people with poor credit because usury laws make it impossible to price the risk of default into the loan contract. The unlicensed lender can charge an interest rate reflecting the actual risk. By agreeing to the interest rate and other onerous terms, the borrower is signaling to the lender a serious intention to repay, so that those onerous terms don’t kick in. And the borrowers seem to be serious indeed: Although only 14% of the loans are paid in full on time, 92% are eventually paid in full, in an average of 15 weeks.

The study also challenges the assumption that borrowers in the informal market have no bargaining power. After the local government cracked down on illegal lending, interest rates for borrowers in the unregulated market rose sharply, reflecting lenders’ increased risk. This means that the lender captures more of the surplus, making the loan less attractive to the borrower. But if borrowers have as little bargaining power as many fear, lenders should have been able to charge those higher rates all along. Possibly the lender’s difficulty in doing so reflects competition in the unlicensed market; or it might suggest the willingness of borrowers to walk away from a deal.

What about all those broken legs? The paper takes a close look at what the authors term “harassment” — pressuring a delinquent borrower to repay. Most of the harassment from unlicensed lenders involves tactics similar to those that exist in the legal lending market: letters, phone calls, visits to home or office. Legal lenders can also ding to borrower’s credit rating, which the unregulated sector cannot, but unlicensed lenders likely share information about who reliably repays and who doesn’t.

Still, as Hollywood reminds us, the key difference in the unregulated market is the ability of lenders to make (and perhaps carry out) other threats as well. The availability of these other threats — the busted-up car, the broken legs — is a crucial element of the popular picture of how loan sharks work, and why they remain in ill repute.

The paper finds, however, that threats are extremely rare. Even when loans were not repaid on time, the main form of extra-legal punishment was vandalism, which occurred in only about 15% of the cases of delinquency. This makes sense. As the authors point out, acts that impose high costs on the borrower will be rare, because those acts are also costly to the lender. (If you send someone to break my legs, that person has to be paid; and the resort to violence involves the risk of criminal punishment.)

Still, the threat of the more-costly forms of harassment is always there. If a government crackdown targets the costly sanctions (no more leg-breaking), the lender will shift to less-costly sanctions, but in order to get the same result will harass more frequently. The authors tell us that “suggestive evidence in the data” supports this analysis.

This suggests that the way to deal with loan sharks is to outlaw their worst tactics, not their lending. But the worst tactics are already illegal. If we really believe that leg-breaking is widespread, we can crack down by enforcing more vigorously the laws on the books. If we believe that loan sharks will always break legs, we could reduce their appeal by softening interest rate caps to allow those with weaker credit access to regulated banking.(2) Some will shiver at the idea, but it was once a goal of those styling themselves progressives.

To be sure, the authors do find some problems in the market for unlicensed loans: Some 47% of delinquent borrowers get the lender off their backs by going to another loan shark. And we can’t be sure how much of a study conducted in Singapore would replicate in other countries.

But if, as the study suggests, those who borrow from loan sharks know what they’re getting into, then the argument against the practice can only be that they have no business borrowing money — in other words, that they should consume less. But it’s not the job of regulators to dictate to consumers what they ought to want. Paternalism is a disease best cured early.

(1) The study includes demographic information on borrowers —for example, that they are overwhelmingly male, and tend to fall below the median income but at the bottom of the distribution —but these data, although intriguing, might reflect aspects unique to Singapore.

(2) This approach might also reduce the number of fraudulent loan sharks, who often will try to collect more than is actually owed.

To contact the author of this story: Stephen L. Carter at scarter01@bloomberg.net