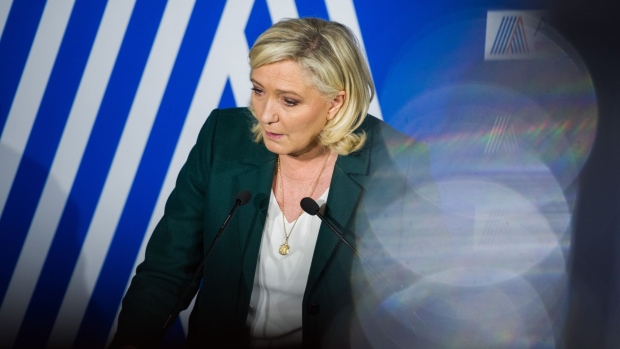 Marine Le Pen, leader of the National Rally party, speaks at an event organised by the Alliance Police National union in Paris, France, on Wednesday, Feb. 2, 2022. Polls consistently give France President Emmanuel Macron around 25% of votes in the France election’s first round, while Le Pen and another right-wing candidate, Valerie Pecresse, are fighting for the second place with around 17%, and Far-right TV pundit Eric Zemmour polling at about 12%. , Bloomberg

(Bloomberg) -- It would be a “good deal” for any bank in the European Union to extend a loan to French far-right presidential candidate Marine Le Pen, a senior official in Hungarian Prime Minister Viktor Orban’s government said.

Orban, the EU’s longest-serving head of government, has been trying to project his influence outside of Hungary, including by pushing to unite with far-right parties like Le Pen’s under one European political umbrella.

While Gulyas said he didn’t know whether a Hungarian bank had extended the loan, he said a state guarantee in France for loans obtained by candidates that win enough votes meant there was little risk. Banks in France have been reluctant to fund Le Pen’s campaign, viewing the candidate as toxic to many businesses despite her efforts to reach out to more moderate voters.

“It’d probably be good business for any EU bank to extend a loan since it would be guaranteed to be repaid soon,” Gulyas told reporters on Thursday. “Freedom of services within the EU is a fundamental freedom.”

Le Pen, who is running second in polls behind French President Emmanuel Macron ahead of April’s presidential election, met Orban in Madrid last month at a gathering of European national parties. She also paid him a visit in Budapest in October. Her party had obtained funding from a Russian company in the past, but since 2017 only EU banks are allowed to finance French political parties.

Orban, who is facing the tightest general election since his return to power in 2010, holds considerable sway over banks in Hungary.

His son-in-law’s company just bought a majority stake in Granit Bank last year, while his closest business ally and childhood friend Lorinc Meszaros -- whom opposition parties regularly allege is a front for Orban’s own business interests -- owns a stake in Magyar Bankholding, Hungary’s second-largest lender. Orban has denied any business links with Meszaros.

Magyar Bankholding declined to comment to Bloomberg News about whether it had extended a loan to Le Pen’s campaign. Granit Bank, in an email, said that while it can’t disclose client information, financing political parties falls outside of its business strategy.