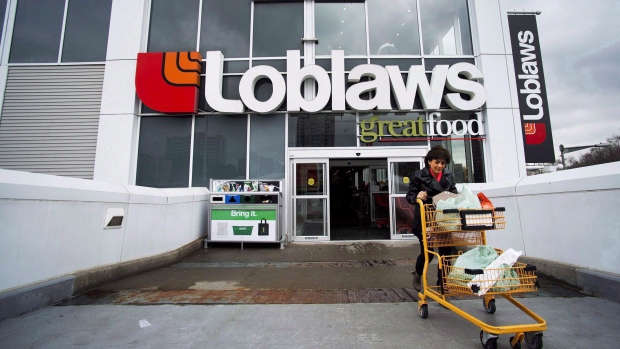 A woman carts out her groceries from a Loblaws grocery store in Toronto on May 1, 2014. , THE CANADIAN PRESS/Nathan Denette

The retailer said Thursday it earned a profit attributable to common shareholders of $254 million or 70 cents per diluted share for the 12-week period ended Dec. 28.

That compared with a profit of $221 million or 59 cents per diluted share in the same period a year earlier.

"Our results reflect the challenges of a competitive marketplace, met with a strong strategic plan. Sales have been hard-won," said executive chairman Galen Weston on a call with analysts.

"At the same time, our industry is in a transitional phase with new cost pressures, potential competitive disruption and exciting new opportunities."

His remarks come as Loblaw has focused on shortening the wait time between ordering and receiving deliveries, resulting in more than $1 billion in e-commerce sales last year, which is almost double the previous year, said Loblaw President Sarah Davis, on the same call.

"While we often refer to our online food business, the impressive growth in e-commerce is right across the board, including in mass and prestige cosmetics, prescription and caregiver services," she said.

She pointed out that the company has recently invested in infrastructure by announcing the closure of two "aging" distribution centres and migrating to a "modern" facility that Davis said would be four times more productive. Loblaw is also toying with a micro-fulfilment centre that it is installing in a grocery store and testing an expanded and fulfilment model for some of its highest volume prescription medicines, which it hopes will free up pharmacists to offer more personal service for customers.

Those moves weren't enough to keep the company's same-store sales performance -- a key retail metric -- from being negatively impacted by about 0.6 per cent from non-food sales.

"The largest part of the drop this quarter was from tobacco due to a legislative change in the packaging and just some disruption that happened as a result of that," said Darren Myers, Loblaw's chief financial officer. "But beyond that, we still could see a softer environment on the apparel and the gross merchandise side."

Analysts on average had expected an adjusted profit of $1.12 per share, according to financial markets data firm Refinitiv.

In its outlook, Loblaw said it will remain focused on delivering process and efficiency improvements to offset increasing costs and to fund continued incremental investments in infrastructure and to support its strategic growth.

In 2020, the company said its results will include a 53rd week, which is expected to benefit adjusted net earnings per common share by approximately eight cents.

On a full-year comparative basis, excluding the impact of the extra week, Loblaw said it expects positive same-store sales and stable gross margin in its retail segment and to deliver positive adjusted net earnings growth.

RBC Dominion Securities Inc. analyst Irene Nattel said in a note on Thursday that she took the company's earnings as a sign that Loblaw is "moving in the right direction...even if not quite as strong as we would like."