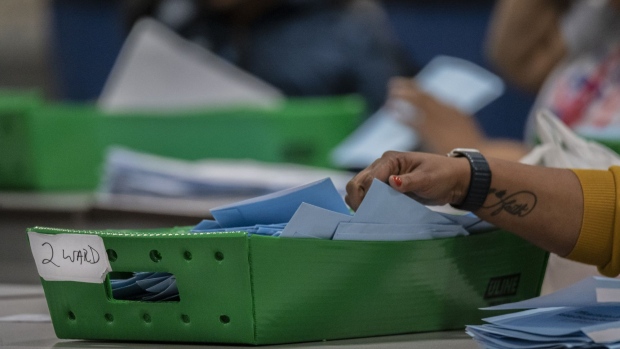 An election worker organizes ballots to be counted at the Philadelphia Ballot Processing Center in Philadelphia, Pennsylvania, US, on Tuesday, Nov. 8, 2022. After months of talk about reproductive rights, threats to democracy, climate change, immigration and crime, the US midterm elections are coming down to the way Americans feel about the overall state of the economy and, in particular, inflation. , Bloomberg

(Bloomberg) -- Some local officials in the battleground states of Arizona, Nevada and Pennsylvania defied state elections laws as they pushed debunked claims about the November midterms, a disturbing trend that could spell trouble in 2024.

The incidents, most of which were rebuffed or ended when the officials backed down, show that despite losses for dozens of candidates who worked to overturn President Joe Biden’s victory, GOP officials are still trying to toy with electoral defeats.

“What we’re seeing now is the beginning of the same playbook that could be used in 2024,” said Matthew Seligman, a fellow at the Constitutional Law Center at Stanford University.

The Board of Supervisors in rural Cochise County, Arizona, refused to certify the November elections, leading the secretary of state and an advocacy group to sue. The Board of Elections in Luzerne County, Pennsylvania, was initially deadlocked on whether to report their tallies to the state. Officials in Nye County, Nevada, repeatedly attempted to hand-count all ballots even as the state Supreme Court tried to stop them, only to give up and use the voting machines for their official count.

The Lawyers’ Committee for Civil Rights, the Brennan Center for Justice at New York University law school and Latham & Watkins LLP have filed an amicus brief in support of the Arizona secretary of state’s suit to force the Cochise County Board of Supervisors to certify.

“It’s really about whether we’re going to allow our democracy to be held hostage by conspiracy theorists,” said Ryan Snow, counsel with the Voting Rights Project at the lawyers’ committee.

A spate of election deniers who ran for offices that certify elections at the state level in battleground states all lost in November, including candidates for governor in Arizona, Michigan, Pennsylvania and Wisconsin and for secretary of state in Arizona, Nevada and Michigan.

In some states, officials are legally required to certify elections and risk lawsuits or even criminal charges if they decline.

That can be enough for some officials. In Mohave County, Arizona, members of the Board of Supervisors postponed a vote to certify citing concerns about voting machines but ultimately approved the results to avoid the risk of felony charges.

Local officials who have refused to certify results have cited routine problems and debunked claims about voting machines that have spread online since 2020.

In Nye County, the interim county clerk fought for weeks to count mail-in ballots by hand, citing unfounded concerns about the integrity of voting machines. In Cochise County, two commissioners cited debunked claims about the testing and certification of voting machines. And in Luzerne County, commissioners cited paper shortages at some polling places on Election Day as they deadlocked on certification before relenting and approving the results on Wednesday.

Hand-counting has been a particular focus of election deniers, who often echo conspiracy theories that circulate online about ballot-counting machines. Studies have shown that hand-counting ballots is more expensive, time-consuming and inaccurate than machine-counting.

The Nevada ACLU, which filed a petition for an emergency order against Nye County when it first started its hand count in October, noted the county’s process, conducted in parallel with the mechanical count, was “alarmingly error-prone,” and the county ultimately used the mechanical tabulator to report its official election results.

A bill that passed the US House of Representatives in September would allow presidential candidates to fast-track legal challenges to state and local elections officials who refuse to certify results. A companion bill awaiting action in the Senate only covers state elections officials.