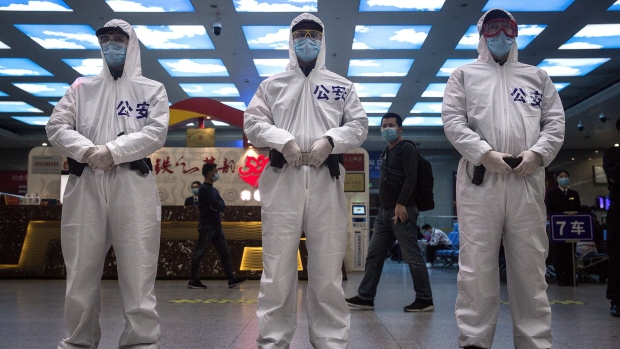 After being ensnared 76 days earlier by the government-ordered lockdown of Wuhan, the epicenter of the coronavirus pandemic, she was finally going home, taking the very first train out of town, in fact, the 12:50 a.m. to Guangzhou.

The temperature taking was something of a nervous tick. Zeng wasn’t sick but still she fretted that train inspectors would somehow determine she had developed a fever and block from her from boarding. When she passed inspection, she was ecstatic. “I haven’t seen my cat in almost three months,” Zeng, a 22-year-old teacher, said. “I’m very happy there are finally trains going out.”

Zeng was one of some 55,000 people who have railway tickets out of the city on Wednesday alone, according to state TV. Flights are resuming from Wuhan’s international airport, which handled 24 million passengers yearly before the outbreak, and people will be able to return to their jobs around the country.

But the lockdown’s end doesn’t mean Wuhan has returned to normal. A web of complex restrictions and fear of a resurgence in infections means many can’t -- or won’t dare to -- go anywhere.

With Wuhan’s economy crushed by the virus, the government’s priority is on getting people back to work, and those returning to their jobs will see greater freedom of movement. Some apartment blocks will require residents to prove they are leaving the premises to return to work before they are allowed out.

Housing compounds in the city will also retain the power to put residents under lockdown again, containing them in their homes if new virus infections are found or suspected on their grounds, Wuhan’s top Communist Party official said earlier this week.

The prospect of the pathogen roaring back is a real concern in Wuhan, where several residents interviewed by Bloomberg News spoke with trepidation, not happiness, about the lifting of the lockdown measures.

“I will only feel safe going out in June when the summer heat can kill the virus,” Fu Bianlin, a 60-year-old lifelong resident of Wuhan said, speaking over the phone. “The end of quarantine could bring more suspicious risks as more people start moving around.”

The lifting of Wuhan’s lockdown is a moment of reckoning for China, which tamed the epidemic at significant economic and social cost for Wuhan and wider Hubei province. While the country recorded its first day without a virus death on Tuesday, releasing Wuhan from quarantine as the pandemic continues to rage globally carries significant risk, but is a crucial milestone for China’s narrative of triumph over the deadly disease.

Some see that as a signal the worst is over.

“The fact that the government is confident enough to say that people can travel out of Wuhan means that the whole situation is well under control,” said Hua Meng, a property evaluator in the city. Hua ran a team of 11 volunteers who ferried medical workers around during the quarantine. “The most stressful time has passed.”

But while Wednesday’s move provides hope for cities from Paris to New York currently in the throes of their own lockdowns, the restrictions China is leaving in place show that the road back to normality will be long.

New virus cases each day may have dwindled to a handful from thousands at their peak, but there’s concern nationwide that so-called asymptomatic carriers -- those who can spread the virus without outward signs of being sick -- remain among Hubei’s population.

At least 10 other Chinese provinces and municipalities, including Shanghai and the industrial hub Tianjin, require travelers from Hubei to be quarantined for two weeks upon arrival. Earlier this month, a clash broke out on the border of Hubei and Jiangxi province as police tried to stop people from Hubei from crossing over.

Layers of monitoring will also remain in place, dictating the movements of Wuhan’s residents long after the lockdown has officially been lifted.

Change in an Instant

Just visiting a shopping mall where a virus case is later confirmed can turn the code yellow, meaning another two weeks of isolation at home. That’s making Wuhan residents wary of returning to previous favourite haunts.

The combined restrictions have meant that business owners have dialed back their expectations for a resumption of activity.

“We were planning to reopen three restaurants on April 8, but now it looks like we will only open one,” Sichuan food restaurateur Xiong Fei said on Monday, sitting in one of his empty restaurants while workers packed food for deliveries around him.

“The quarantine is not lifting in a real sense. It would be a big hit to us if so people cannot leave their communities to dine out.”

China said on Tuesday that there were no new coronavirus deaths reported in the country for the first time since January, while there were 32 new cases of infection, all from returning travelers. In total, China’s official count stands at 81,740 confirmed cases, with 3,331 deaths. There are 77,167 patients who have recovered.

The memory of the chaos that ensued when the lockdown was first imposed on Jan. 23 is still fresh for those who lived through it. The mass quarantine was announced around 2 a.m. and implemented at 10 a.m. More than five million people left the city before the restrictions were put in place, and those who stayed saw their lives turned upside down.

In the surreal and frightening weeks that followed, a day like today didn’t seem possible.

“I will be fully prepared for things not to go as expected,” said Ma Renren, 33, who runs a small marketing agency. “If we’ve learned anything, it’s that policies can change in an instant.”