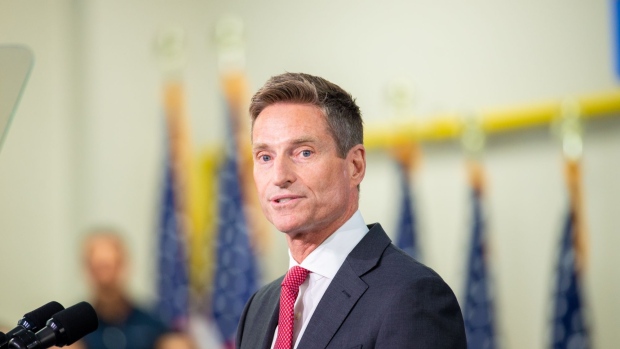 Jim Taiclet, chairman and chief executive officer of Lockheed Martin Corp., speaks during a visit from U.S. President Joe Biden, not pictured, at the company's facility in Troy, Alabama, U.S., on Tuesday, May 3, 2022. Biden stressed the importance of U.S. and allied weapons for Ukraine's defense Tuesday with a visit to a Lockheed Martin Corp. plant making Javelin anti-tank missiles, which American and NATO officials say have mauled Russia's invading armored columns. , Bloomberg

(Bloomberg) -- Lockheed Martin Corp. is working to almost double its production capacity for Javelin missiles to 4,000 a year and achieving that goal will require the supply chain to “crank up,” the defense contractor’s top executive said.

The Ukrainian army has used Lockheed’s missiles to great effect in destroying Russian tanks and armaments, and the company is ramping up production to ensure the U.S. military’s supplies aren’t depleted. Right now Lockheed can build about 2,100 Javelins a year, Chief Executive Officer Jim Taiclet said Sunday on CBS’s “Face the Nation.”

“We’re endeavoring to take that up to 4,000 per year, and that will take a number of months, maybe even a couple of years to get there because we have to get our supply chain to- to also crank up,” Taiclet said. “We think we can almost double the capacity in a reasonable amount of time.”

One way to help the situation is for Congress to pass the Bipartisan Innovation Act that would propel domestic design and manufacturing of microprocessors, reducing the reliance on foreign supply, Taiclet said. Each Javelin requires about 250 microprocessors, he added. Lockheed is working with partners including Intel Corp. to support the defense industry’s needs.

U.S. President Joe Biden visited the Javelin factory in Troy, Alabama, last week and urged Congress to authorize an additional $33 billion in aid for Ukraine -- with lawmakers warning that stockpiles of the U.S. Army and Marine Corps’ premier anti-tank weapon are becoming depleted due to the war.

The self-guided portable missile system -- which weighs just 49 pounds (22 kilograms) -- has proved invaluable to Ukrainian fighters, who can fire on Russian vehicles from as far as 4,000 meters (2.5 miles) away and then quickly flee. The U.S. has already delivered about 5,000 of the 5,500 Javelins the White House has committed to provide to Ukraine, a senior defense official told reporters last week.