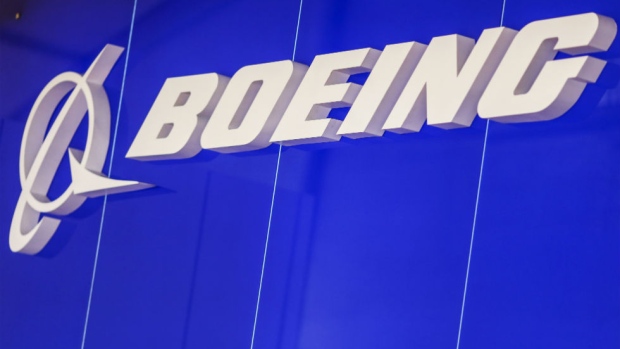 The Boeing Co. logo is displayed at the company's pavilion during the India Aviation 2014 air show held at Begumpet Airport in Hyderabad, India, on Wednesday, March 12, 2014. , Bloomberg/Dhiraj Singh

The U.S. Air Force outlined a five-year plan that showed the extent of the Pentagon’s push to bring back Boeing Co.’s F-15 fighter in an upgraded version, a US$7.8 billion investment that would jump from eight of the planes next year to 18 each year through 2024.

While Lockheed Martin Corp.’s newer F-35 would get US$37.5 billion over the five years, the more advanced plane would still take a hit. The service now plans to buy 48 F-35s each year from fiscal 2021 through 2023 instead of the 54 previously planned.

A week after President Donald Trump presented his proposed budget for the fiscal year that begins in October, the Air Force spelled out a longer-range five-year plan on Monday that’s sure to set off fierce congressional debate, including over the plan to buy 80 F-15X models and slow the trajectory of the F-35. That debate already has begun.

“As our nation’s only fifth-generation stealth fighter being built today, an investment in additional production and support for the F-35 fighter fleet is critical to ensuring the U.S. maintains air superiority,” five senators said in a letter last month.

The letter to Trump and Acting Defense Secretary Pat Shanahan was signed by Republicans John Cornyn and Ted Cruz of Texas, Lisa Murkowski or Alaska, Susan Collins of Maine and Marco Rubio of Florida. The F-35 is built in Texas, and some will be based in Alaska.

General Joseph Dunford, chairman of the Joint Chiefs of Staff, told the Senate Armed Services Committee last week that Pentagon officials decided to buy the F-15X partly because it’s “slightly less expensive for procurement than the F-35, but it’s more than 50 per cent cheaper to operate over time and it has twice as many hours in terms of how long it lasts.”

Among other major elements of the Air Force’s five-year plan sent to Congress: