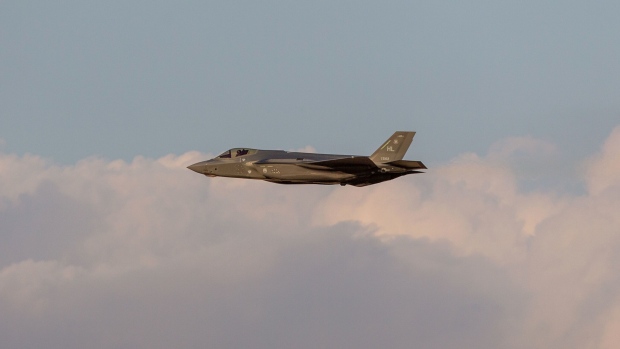 (Bloomberg) -- Lockheed Martin Corp. said it will deliver fewer F-35 fighters next year than previously planned under a schedule revised for the impact of Covid-19 on its workforce and production.

The initial contractual goal was for 158 to 163 of the advanced fighters to be delivered in 2022, according to the Pentagon’s F-35 program office. Now, Lockheed said in a news release Monday, it projects 151 to 153 jets for next year, followed by 156 in 2023 and annually “for the foreseeable future.”

The F-35 production revision for lots 12 to 14 “ensures predictability and stability in the production process while recovering the aircraft shortfall realized over the last year during the COVID-19 pandemic,” Lockheed said. The largest U.S. defense contractor is expected to deliver 133 to 139 aircraft this year, according to the announcement.

The Defense Department is expected to decide next month on a new schedule for a major milestone in the $398 billion acquisition program, the Pentagon’s costliest: when it’s supposed to undergo a one-month stimulation exercise to test the F-35 against the most advanced air defenses and aircraft of adversaries. It’s a step needed to make a decision on full-rate production.

Lockheed’s revised schedule “shows the production constraints and supply chain disruptions resulting from the pandemic, and probably other causes,” Richard Aboulafia, aviation analyst with Teal Group, said in an email. “Stalling out at 156 per year” after 2022  “isn’t terrible, but it isn’t the 170-plus we were expecting in the next few years.”

The Government Accountability Office said in a July report on F-35 support and maintenance that, as of April, the program planned for 158 aircraft deliveries in 2021. “However, almost all of the aircraft delivered so far in 2021 have been late, and Lockheed Martin is not projected to deliver all 158 aircraft, according to program officials.”

Still, “the F-35 program expects to produce a high number of aircraft in 2022,” the GAO said. “The most aircraft the contractors have delivered in one year has been 134, which they accomplished in 2019, before many of the supply chain challenges were present.”

The program once planned for 167 deliveries in 2022, “which is more than the contractors have ever delivered and 47 more aircraft, and 39% greater, than it delivered in 2020,” according to the watchdog agency.

The delivery levels projected for 2023 and after “may reflect decisions about the DoD F-35 buys in the FY23-27 budget request and plan that is being finalized” plus the “absence of significant congressional add-ons to F-35 unit buys in the fiscal 2022 request and beyond,” Byron Callan, a defense analyst with Capital Alpha Partners LLC,  said in a note to clients on Monday.