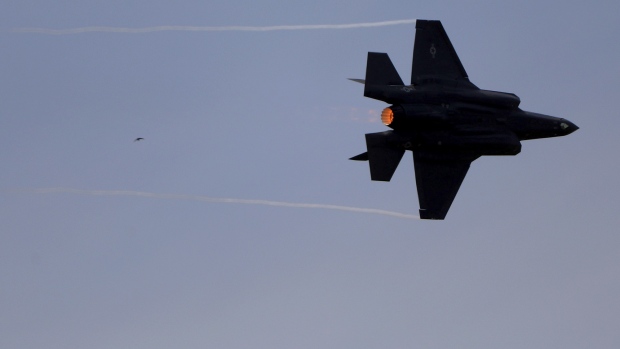 A F-35A fighter jet, manufactured by Lockheed Martin Corp., performs aerial maneuvers during a flying display at the 53rd International Paris Air Show at Le Bourget, in Paris, France, on Tuesday, June 20, 2017. The show is the world's largest aviation and space industry exhibition and runs from June 19-25. , Photographer: Chris Ratcliffe/Bloomberg

Lockheed Martin Corp. has failed to supply ready-to-install spare parts for its F-35 fighter -- from wheels and tire assemblies to seats -- and may have been overpaid as much as US$10.6 million in bonuses, according to the Defense Department’s inspector general.

“We determined that the DoD did not receive ready-to-issue F‑35 spare parts in accordance with contract requirements and paid performance incentive fees on the sustainment contracts based on inflated and unverified” hours that Air Force and Marine Corps planes would be ready to fly, the Pentagon’s internal watchdog said in a report released Monday.

It happened because the Pentagon’s F-35 program office “did not conduct adequate oversight of contractor performance,” according to the report. It found the office hasn’t resolved “contractor non‑performance related to the delivery of non‑ready-to-issue spare parts since 2015.”

“F‑35 aircraft are already proving to be more expensive to sustain than originally planned and, as the DoD adds more aircraft to the F‑35 fleet, the strain on the aircraft logistics system will increase,” the inspector general said. Problems with parts not ready to be installed “may continue to multiply and affect already increasing sustainment costs and F‑35 mission capable rates,” it said.

The long-term cost of operating and supporting the fleet of fighters over more than six decades has increased to US$1.196 trillion, according to a Pentagon’s latest cost assessment of major projects.

The parts were considered inadequate for installation not because of safety or manufacturing flaws but because they were delivered without the required inclusion of electronic data needed by maintenance crews, such as a part’s history and its remaining useful life. Parts aren’t supposed to be installed without the data.

The lack of information “creates a life and safety concern for aircrews” if Pentagon personnel “make mistakes on the number of hours the spare part was flown.” it said.

Investigators found instances at two F‑35 sites where pilots had flown aircraft with non‑compliant spare parts, such as wheel, seat and window assemblies, as early as August 2017. That “unintentionally inflated aircraft availability hours,” which is one measure for incentive fees to Lockheed.

In writing policy and funding legislation, three of the four congressional defense committees have added F-35 jets beyond the 78 the Pentagon requested for fiscal 2020. Such increases have only exacerbated pressure on the supply chain and added to the F-35’s chronic failure to meet goals on its availability for missions.

The lack of available spare parts “could result in the F‑35 fleet being unable to perform required operational and training missions,” the inspector general said.

“Despite the Joint Program Office being aware of this problem, it did not resolve the issue or require the services to track the number” of non-compliant spare parts received, the report found.

A representative for Bethesda, Maryland-based Lockheed didn’t immediately respond to a request for comment.

The inspector general recommended that the Pentagon program office seek refunds or additional services free of charge from Lockheed to compensate the military for the chronic parts problems.

Vice Admiral Mathias Winter, the program office’s director, said in a written statement included in the report that his office and the Defense Contract Management Agency are working up a package of compensation to include potential payments.

In 2017 and 2018, Lockheed earned “33 per cent more in performance incentive fees, over US$10.6 million” by getting the Pentagon to categorize planes as available when they weren’t because of “incidents that are beyond the control of the contractor,” the inspector general found.

In one case, the watchdog office found, Lockheed got the Pentagon to add 744 hours of aircraft availability after lightning struck an Air Force model of the F-35 in July, grounding it.