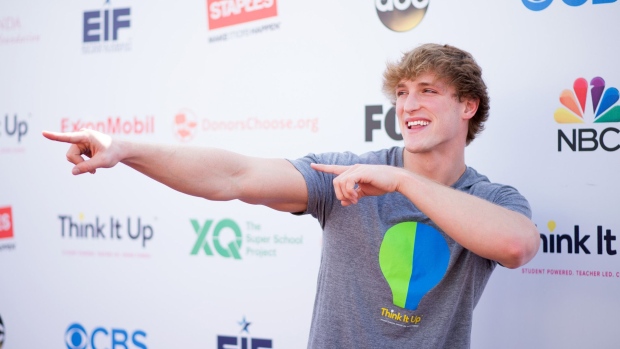 On June 6, Floyd Mayweather, once regarded as the best pound-for-pound fighter in boxing, will step into the ring at Hard Rock Stadium in Miami Gardens, Florida, for a much-anticipated exhibition showdown that will air live on Showtime pay-per-view for US$49.99. Mayweather’s opponent will be someone who spent his formative years training for combat in what is perhaps the bloodiest, dirtiest and most-harrowing realm of contemporary, gladiatorial life — namely, the alligator pits of social media.

Mayweather will be fighting Logan Paul, former champion of the YouTube world.

Paul, 26, is a boxing newbie. And yet seemingly overnight, in the wake of several bruising, social-media scandals that left his reputation in tatters, the scrappy, blond brawler has emerged as one of the top attractions in boxing, selling out arenas, racking up millions in pay-per-view sales and igniting a passion for the sweet science among a young demographic of fans who until recently couldn’t care less. “It will be one of the most viewed events of the year, if not boxing history,” said Jeff Levin, his manager.

At a time when the alchemy of cultural cancellation is under intense study, Paul’s sudden transformation from reviled internet dude to must-see athlete is shaping up to be a draw of its own. Levin suggested his client’s metamorphosis is more reasonable than one might think. “Logan is all about entertainment,” said Levin. “He’s wanted to be the biggest entertainer. Sports is another form of entertainment for him. It’s very calculated.”

Not to mention, very lucrative. Social media made Paul famous. Boxing is making him rich.

Paul is now making more money from boxing than he ever made from hawking brands as a social-media influencer. The same goes for his younger brother Jake Paul, who has followed a similar career path from social-media provocateur to crowd-pleasing boxer and recently signed a deal for a future fight on Showtime. If the numbers they tout publicly are even remotely accurate — there is a long history of exaggeration in boxing — they are raking in millions of dollars per fight. Their time in the ring is also fueling other parts of their business. Logan’s merchandise line generated US$40 million in sales during its first nine months.

“I make way more from boxing, and that’s been the case for a while now,” Jake said during an interview from Puerto Rico, where he and his brother now live.

Before his descent into social-media infamy, Logan first rose to fame on Vine, a short-form video app where he posted goofy scenes of himself jumping over oncoming traffic, stripping into his wrestling uniform in a supermarket and breaking through a wall in his home to open Christmas presents. In 2015, Logan was named one of its most influential figures.

When Vine imploded, Logan branched out to other platforms. Over time, he ascended to global stardom on YouTube thanks to his frequently posted videos, which tended to be short, sophomoric and wildly popular. Eventually, traditional media took note and came calling. Logan appeared on  TV shows such as “Law & Order: Special Victims Unit” and landed several major endorsement deals.

Around the same time that YouTube began to focus on courting top advertisers, his antics started to become a problem. On New Year’s Eve in 2017, Logan uploaded a video to his YouTube channel showing a corpse hanging from a tree in Aokigahara, a forest in Japan that’s notorious for frequent suicides. None of which stopped Logan, then 22, from cracking some jokes at the victim’s expense.

Celebrities, politicians and fellow YouTubers lambasted him for his insensitivity, and several petitions on Change.org called for YouTube to punish the star. YouTube gave Logan a slap on the wrist, removing his 15-million-plus-subscriber channel from Google Preferred, its program for premium advertising, and canceling plans for a movie that would have cast Logan in a starring role.

In the months that followed, he made matters worse by posting a video in which he tased two dead rats. YouTube suspended all advertising from his channel. Once billed as the next big thing, Logan suddenly appeared to be the latest internet celebrity to burn brightly only to fizzle out fast.

“We did have the down years after the Japan incident,” said his manager, who chalked up the events to Logan’s youth, naivete and fame. “Everybody has issues. His just were front and center to the whole world. And recorded.”

Not long after the internet deemed Logan to be the ultimate YouTube villain, he turned his attention to boxing, a sport that, not coincidentally, has always embraced villainous characters (see Tyson, Mike).  Before long, he accepted a challenge to fight a British YouTuber named KSI. Logan had never boxed before, but he had wrestled in high school.

In the end, about 21,000 people bought tickets to the fight in Manchester Arena, which was billed as the “the biggest internet event in history.” While the quality of the boxing didn’t bring back memories of Muhammad Ali versus Joe Frazier, people ate it up anyway. More than 1 million people paid to watch the fight live on YouTube, and many more pirated it online.

Initially, some boxing fans dismissed Logan as a sideshow, an amateur narcissist giving the sport a bad name. When he approached Showtime about airing his rematch with KSI, the network turned him down. “There is a backlash among the purists and traditional boxing fans,” said Stephen Espinoza, the head of Showtime Sports. “I’d say there probably was a least some initial feeling of that in myself and perhaps some of my colleagues.”

One of the first mainstream sports companies to grasp the potential was DAZN, which signed on to stream the rematch in November 2019 at Staples Center in Los Angeles. Unlike the first fight, which was an amateur event, this one marked Logan’s debut — and first loss — as a professional fighter. The bout turned out to be one of DAZN’s most popular events of the year.

When it came time for Logan’s next appearance in the ring, DAZN somehow lost out to Triller, a short-form video app. Triller looked to Logan and his brother as the cornerstones of a new pay-per-view fight package and the key to luring more social-media influencers to join the platform. Again and again, the brothers’ fights turned into major successes.

The duo’s sophomoric on-screen personas belie their strong work ethic. They have trained for months before every fight, combining jogging, shadow boxing, sprinting, yoga, high-intensity workouts and ice baths. Last year, they moved to Puerto Rico where they have set up a boxing training camp and sparred with some of the island’s top fighters.

When it comes to showmanship, the Pauls evoke World Wrestling Entertainment more than contemporary boxing. They will only fight people with large social-media followings, and they treat each event as an entertainment spectacle — not just a boxing match. Pop star Justin Bieber walked Logan to the ring for his bout against KSI and later performed at Jake’s fight against mixed martial artist Ben Askren. During Jake’s most recent fight, rapper Snoop Dogg provided commentary.

Along the way, the Pauls have used the tools they developed as entertainers on Vine, YouTube, Instagram and Facebook to bring attention to the events and to cater to their most ardent fans: the 14-to-28-year-old guys who love fighting and trolling. These boys, young men and man-children will buy their T-shirts and pay to watch their boxing matches. They might even pay to watch a Paul sumo wrestle or eat Jell-O.

“The star-making machinery and apparatus has been taken out of the hands of corporations and put in the hands of self-made entrepreneurs,” said Showtime’s Espinoza.

The more that right-minded social critics disapprove of the Paul brothers, the move their stock rises in the ring. Such is the life of an internet heel. Saying irritating things or acting like a buffoon is simply smart business, good for the bottom line.  “It’s all a game,” Jake said. “It’s show business. There’s a way to play it.”