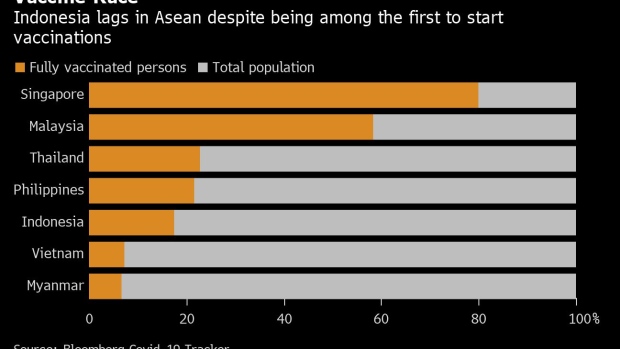 (Bloomberg) -- A shortage of healthcare workers and logistical flaws are hampering Indonesia’s efforts to inoculate its people against Covid-19, leaving the world’s largest archipelago trailing its neighbors despite being among the first in Southeast Asia to start the program.

Only 17.9% of Indonesia’s 270 million people are fully vaccinated, behind almost every major economy in the region, according to Bloomberg Vaccine Tracker. About 32% have received their first dose, placing the nation among the bottom four on the list.

“Supply at the national level is no longer an issue, getting shots into the arms of the people is,” said Griffith University epidemiologist Dicky Budiman, who is assisting the government in improving vaccination coverage. “Even in East Java, where there is sufficient stocks, there isn’t enough vaccination booths and not enough vaccinators on site to deliver the shots.”

The slow inoculation progress risks Indonesia’s efforts to keep the pandemic under control and sustain the fragile recovery of its $1.1 trillion economy. A new outbreak caused by the more contagious delta variant forced the government to reimpose its strictest mobility curbs at the start of the third quarter, with the restrictions helping bring down its weekly death count to the lowest since mid-April.

The nation is slowly building up its Covid-19 vaccine stocks after a shaky start earlier this year, and has so far received 273.6 million doses, some in the form of bulks that need further processing, the information ministry said in a statement Friday. The government targets inoculating 208 million people across the country.

Indonesia to Visit ‘Reluctant’ Elderly to Get Them Vaccinated

The administration is setting up more vaccination centers with help from the police, army, and intelligence personnel, educating those who are still hesitant and improving data tracking via an app, Covid-19 taskforce spokesman Wiku Adisasmito said in an interview on Thursday. With an aim of administering more than 1 million shots a day, the government expects to reach 70% coverage before the end of the year.