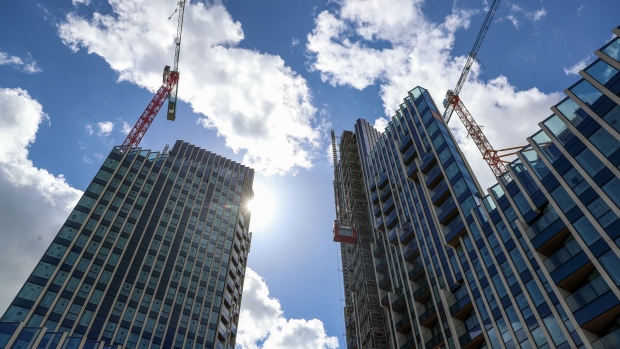 Construction cranes on the newly developed Upper Riverside residential development by London & Quadrant Housing Trust Ltd. (L&Q), on the Greenwich Peninsula in London, U.K., on Friday, April 26, 2019. The number of unsold homes under construction increased to 31,508 units as of March 31, the highest level recorded since Molior London began compiling the data a decade ago. , Bloomberg

(Bloomberg) -- House prices in London continued to drop this month, though the downturn is showing some signs of leveling off, according to Rightmove.

Asking prices in the capital fell 0.4% in June, the property-website operator said in a report Monday. That left the annual drop at 2%, the slowest pace of declines since January.

The report is the first in a run of economic data due this week before Bank of England policy makers announce an interest-rate decision on Thursday. Officials are expected to vote to keep policy unchanged, although they may try to use to the minutes of the meeting to shift market expectations -- which are currently at odds with their outlook.

The Rightmove data add to signs that the housing market -- which has struggled in recent years due to political uncertainty and affordability issues -- has gained some temporary relief from the delay to Brexit. Nationally, prices rose 0.3% in June, pushing the average home value close to a new record.

Still, there remain signs of caution in the market, with new seller supply down by an average of 5% versus the same period in 2018.

In a separate report Monday, the British Chambers of Commerce unveiled a downbeat outlook in its latest economic forecast, predicting growth of 1.3% this year, 1% in 2020 and 1.2% in 2021. The scenario assumes the U.K. avoids a chaotic exit from the European Union.

To contact the editors responsible for this story: Paul Gordon at pgordon6@bloomberg.net, Brian Swint, Jill Ward