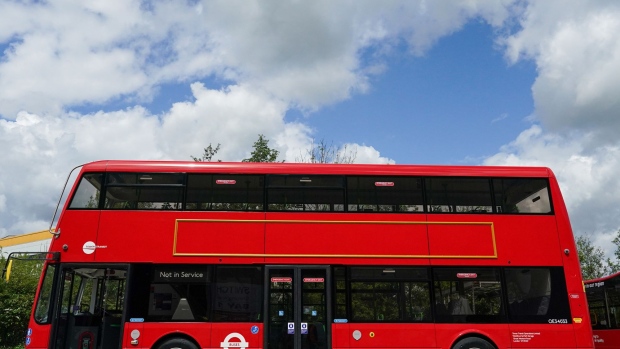 LEEDS, ENGLAND - MAY 19: Electric buses are displayed during a visit to the electric bus manufacturer Switch Mobility by Sadiq Khan, Mayor of London and Tracy Brabin, Mayor of West Yorkshire in Yorkshire on May 19, 2021 in Leeds, England. The visit comes to see the affects that green investment from Transport for London is having in different parts of the country. There are currently 67 Switch electric buses in operation in London’s London fleet, and Switch estimate that around 50 per cent of their revenue last year was from TfL contracts. (Photo by Ian Forsyth/Getty Images) Photographer: Ian Forsyth/Getty Images Europe , Photographer: Ian Forsyth/Getty Images Europe

The city’s bus fleet will be zero-emission by 2034 instead of 2037, according to a statement Friday by the mayor’s office. By the end of next year, 10% of London’s bus network will operate without emitting greenhouse gases.

“London’s toxic air is a shameful health crisis which is causing premature deaths and stunting the growth of children’s lungs,” Khan said. “London will no longer procure new diesel or hybrid buses and will only procure zero-emission buses.”

There were 9,068 buses in London’s fleet as of March 31, according to Transport for London data. In June, BYD Co. and NFI Group-owned Alexander Dennis Ltd secured an order from a transport operator in the city for 195 single and double-deck electric buses, according to a statement by Alexander Dennis.