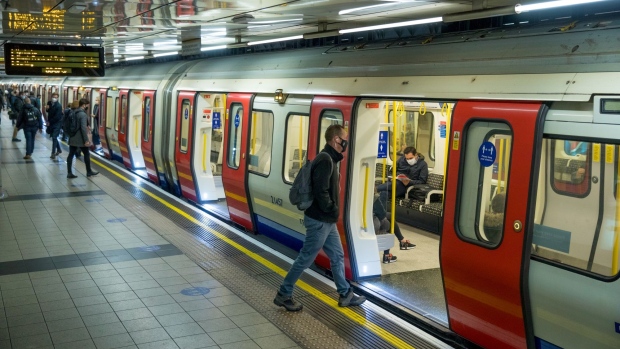 Commuters board a London Underground train in the City of London, U.K., on Monday, Oct. 12, 2020. The approach of Brexit has London confronting the loss of its role as Europe's undisputed stock-trading hub and, with it, billions of euros in daily trading. Photographer: Jason Alden/Bloomberg , Bloomberg

(Bloomberg) -- London business chiefs called for a government rescue of the city’s subway, which is seeking a 5.8 billion-pound bailout ($7.5 billion) after the coronavirus outbreak led to a collapse in commuter travel that sent revenues plunging.

The U.K. capital risks grinding to a halt without swift funding for Transport for London, which also runs the London Overground and Docklands Light Railway, 34 executives including the heads of Heathrow Airport, British Land Co. and Canary Wharf Group said in a letter to Chancellor of the Exchequer Rishi Sunak.

“We want to remind all parties that the stakes are extremely high for the future of London and the U.K.,” the letter said. “London’s transport network is critical national infrastructure and TfL must have sufficient funding for both its operations, at normal service levels, and their maintenance.”

London’s 150-year-old subway has become a focus for political tension, with Sadiq Khan, the city’s Labour mayor, who oversees TfL, pressing for a financing package while ordering a review of long-term funding options. Prime Minister Boris Johnson, a Conservative, has said the authority is inefficiently run and that reforms such as driver-less Tube trains should be part of any package.

TfL’s revenue fell 90% at the start of the Covid-19 lockdown. While some passengers have returned, with the government continuing to advise people to work from home where possible and tightening other curbs, commuter networks are unlikely to see a major rebound any time soon.

TfL is seeking 1.83 billion pounds to see it through to March on top of more than 1 billion pounds from an initial bailout, and reckons it will need 2.94 billion more in the 2021-2022 fiscal year. That equates to more than 700 pounds for every Londoner, the London Assembly said last month.

Any agreement should also include sufficient funding to ensure that the Crossrail project linking counties west of London with the Thames estuary via the city center “gets over the line in 2021,” the companies said. The line has been afflicted by long delays and cost overruns.

Signatories of the letter, sent by the London First lobby group, also said TfL needs to reduce its reliance on fares, which account for 70% of its budget, compared with only 38% for New York’s transit system.