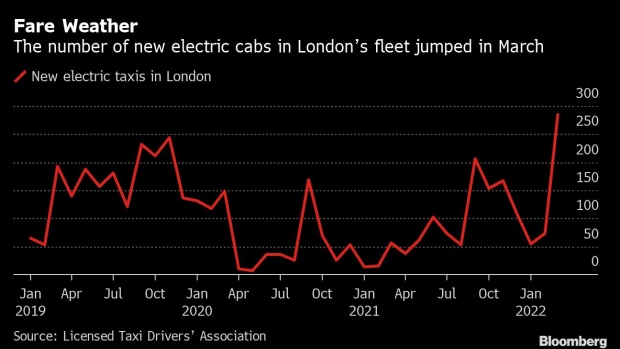 Commuters wait in a line at a taxi stand, during strikes on the underground rail service, in London, U.K., on Thursday, March 3, 2022. Londoners are being advised to work from home on Tuesday and Thursday to avoid disruption caused by strikes after the the RMT union failed to reach an agreement with Transport for London over changes to pensions and the threat of job cuts. , Bloomberg

(Bloomberg) -- London taxi driver John Bartlett parked his black cab during the depths of the pandemic last year rather than work 10 hours to make £70 pounds -- on a good day. His mood has since made a U-turn.

“I’ve been doing this 25 years and it’s busier than I can remember,” he said.

It’s a sharp turnaround from the dark days of Covid-19 restrictions that emptied tourist meccas like Trafalgar Square and rendered the financial district a ghost town. As visitors reappear and commuters return to the office, local cabbies are emerging from the doldrums less pessimistic about a future against fast-growing rivals like Uber Technologies Inc.

In a wider show of such confidence, the number of newly licensed taxis in London jumped by 452 in the first quarter, five times the increase a year earlier. Most of the incoming fleet are electric-assisted vehicles that cost about £68,000 ($83,000), according the Licensed Taxi Drivers’ Association.

“We’re seeing a real renaissance,” said Steve McNamara, the LTDA’s general secretary. Younger passengers accustomed to deep discounts via ride-hailing apps “aren’t standing out in the rain at 2 a.m. staring at their phones waiting for a ride -- they’ve switched to taxis,” he said.

“We’re very confident,” Chief Executive Officer Dara Khosrowshahi told analysts this month. “We see profitability in the U.K. healthy and improving into the balance of the year.”

For the moment, the hacks are happy to be busy again. Ridership is solid, and the number of drivers has declined in recent years.

Before the pandemic, there were about 22,500 drivers of London’s iconic black cabs, though at last count in March, their ranks had shrunk by about 3,000. The LTDA is now is seeing them return now at the rate of 25 to 30 a week.

Part of the reason is confidence that business travel and tourism will be sustained. Heathrow Airport on Tuesday reported an 848% jump in passenger volumes in April from a year earlier. It raised its forecast for this year to 53 million travelers, though that’s still just 65% of pre-pandemic levels.

Cab drivers are welcoming the rebound, given that fuel costs and a lot of other expenses are on the upswing.

“It’s very busy,” said John McAllister, who now drives half days after a 30-year career doing it full time. “People are going back to work and the tourists are coming back -- quite a few Americans especially -- and the hotels seem to be busier.”

Tom Hutley, a driver who has 48,000 subscribers to his YouTube channel, said business “certainly has bounced back” but it’s more sporadic than before the pandemic.

“Weekends are very busy with lots of people trying to hail you down even though the taxi is occupied. Weekdays can feel like someone has turned a switch off by comparison,” he said. “It’s almost an all-or-nothing experience.”

Even though incomes are rebounding, the profession faces longer-term challenges. More than 90% of drivers are men, most over the age of 50. After Uber entered the market almost a decade ago, the influx of cheaper competition became one of the many flashpoints in Britain’s public discourse about immigration that culminated with the Brexit vote in 2016.

Fueling that debate still is the rather large barrier to entry.

With their coveted green badges, black-cab drivers are armed with an ability to pinpoint the locations of thousands of landmarks in an area totaling 113 square miles -- even in an age when GPS does as much. Cabbies acquire “the Knowledge” through study and testing that usually takes three or four years and can cost more than £10,000.

The training is overseen by Transport for London, a city government agency. First introduced in 1865, the program is under review for possible changes, according to Knowledge manager Katie Chennells.

“I don’t believe that making the Knowledge process easier is the solution,” she said in an interview in this month’s Taxi magazine. Still, “we should always be looking at ways to improve the current process and make it as efficient as possible whilst maintaining that high standard.”

It’s hard to say precisely how much London’s cabbies earn on average because it varies widely. Transport for London has estimated the figure at more than £40,000 a year. Some drivers said as much as £60,000 can be the norm in good economic times -- well above the median full-time pay of about £32,000 nationally.

This month, with U.K. inflation soaring, drivers cheered increases to base fares including the lifting of the minimum rate by almost a fifth to £3.80.

Threats to their livelihoods remain, ranging from soaring petrol costs to new bike lanes and the constant headache of road construction. Always lurking are competitors like Uber and Bolt, and other proponents of deregulation.

“As Britain reopens after the pandemic, it is imperative that we move towards more flexible and innovative transportation services,” a paper released this month from the Adam Smith Institute urged. “Old, even ancient, legislation continues to blight the development of transport services and the investment that follows.”

For now, an average of about 50 new electric-powered cabs are joining the fleet each week, according to the drivers association. Last month, the London Electric Vehicle Co., a wholly owned subsidiary of China’s Geely Automobile Holdings Ltd., announced the 5,000th sale of the TX model since the vehicles debuted in 2018.

“If you had asked me five years ago, ‘should I do the Knowledge,’ I would’ve said don’t go anywhere near it,” Bartlett said during a recent ride into the city from North London. “But if you asked me now, I’d say yeah I think it’s got a future.”