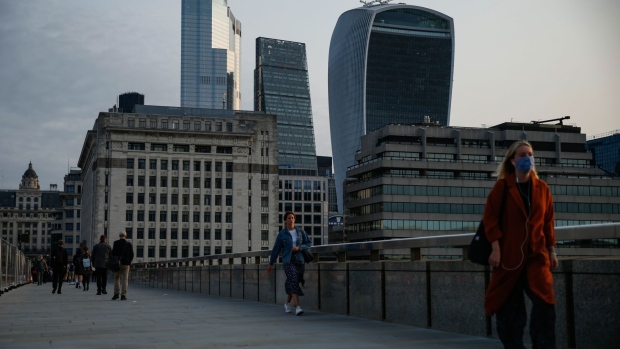 Commuters cross London Bridge in view of skyscrapers in the City of London square mile financial district in London, U.K., on Friday, Sept. 11, 2020. Britain recorded strong economic growth in July as coronavirus restrictions eased, but mounting job losses and the risk of a messy Brexit are threatening a turbulent end to the year. , Bloomberg

(Bloomberg) -- The heads of Man Group Plc and Schroders Plc say the shift to working from home during the pandemic will become the new normal for financial firms.

Man Group expects to have about 10% of employees back in the office next week unless the government imposes new restrictions on London, where the majority of its roughly 1,500 staff work, Chief Executive Officer Luke Ellis said at a virtual event on Monday. The world’s biggest publicly traded hedge fund firm won’t even try to get back to having more than about 70% of staff working in the office on any given day.

At Schroders, about 20% of its employees are in the office now, and if that number rises to 50% in the future that would be “very positive,” CEO Peter Harrison said at the City Week event. The London-based asset manager, which has about 5,000 employees worldwide, recently loosened its rules to to make it easier for staff to work from home when they need to.

While the U.K. government has been encouraging workers to resume working in the office, rising numbers of Covid-19 infections have put that return at risk. Health Secretary Matt Hancock said Sunday that national restrictions could be reimposed unless people comply with rules that include limiting gatherings to six people.

Ellis said that the average worker in the City of London spends about 10% of income on commuting. “If they don’t have to do that apart from occasionally, that is a significant benefit for them, that in the long run means lower cost for the company,” he said.

As disruptive as the pandemic has been for the financial services industry, the impact pales when compared with the last financial crisis, Ellis said.

“I remember in 2008, going out and buying 50 extra sheep to have in a field outside my house as well as making sure I had something to defend the sheep,” he said. “I was that worried about what would happen if the banking system in the U.K. collapsed.”