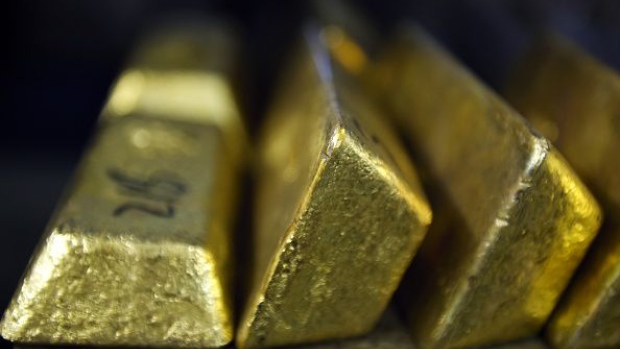 Gold bars sit in a vault at the Perth Mint Refinery, operated by Gold Corp., in Perth, Australia, on Thursday, Aug. 9, 2018. Demand for coins and minted bars was a little sluggish over the past year as Donald Trump's earlier win in the presidential poll prompted investors to divert funds into stocks, bonds and property, said Perth Mint's Chief Executive Officer Richard Hayes on Aug. 8. Photographer: Bloomberg/Bloomberg , Photographer: Bloomberg/Bloomberg

Canadian miner Yamana Gold Inc. plans to list in London in the coming months, potentially signaling a revival in fortunes for the city that’s lost its biggest gold names in recent years.

Once Yamana lists in London, it will offer local investors exposure to production in the Americas and another choice to larger rival precious metal miners Fresnillo Plc and Polymetal International Plc.

The company said it won’t raise money as part of the listing, but hopes to become the “investment of choice” for those seeking gold exposure.

While Toronto, Johannesburg and Sydney have long hosted the biggest producers, London vies with New York as the world’s premier gold trading hub and its financiers have bankrolled the industry since the development of South Africa’s giant gold fields more than 130 years ago.

Still, most of the London-listed gold miners have struggled in recent years or left all together.

Star performer Randgold Resources Ltd. delisted about a year and a half ago after being bought by Barrick Gold Corp., while companies such as Petropavlovsk Plc and Centamin Plc have struggled to deliver consistent returns.

Yamana currently produces about 1 million ounces a year of gold and silver equivalent and has a market value of $7.2 billion (US$5.3 billion). The company has producing mines in Canada, Brazil, Chile and Argentina.

Other gold miners have also looked to repeat the success of Randgold, which became an investor favorite before it was bought. Resolute Mining Ltd. listed last year, while AngloGold Ashanti Ltd. is also considering a listing in London.

Yamana’s plan to list on the London Stock Exchange also comes as gold prices trade near an eight-year high. The metal has rallied as investors seek a haven from the global economic downturn and massive central bank stimulus measures.