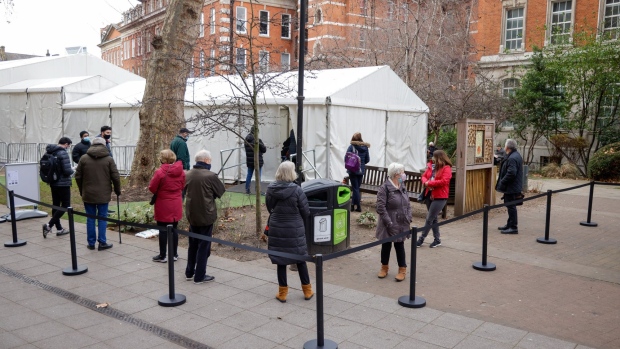 Visitors queue outside a Covid-19 vaccination centre at Guys hospital in London Bridge in London, U.K., on Monday, Jan. 11, 2021. The U.K. said its coronavirus vaccine rollout will accelerate with the opening of seven regional centers at sports and conference venues this week, amid warnings hospitals are struggling to cope as cases surge. , Bloomberg

(Bloomberg) -- Londoners have received one tenth of all vaccine shots administered in England, despite facing a crisis that’s pushing the capital’s hospitals to the brink of collapse.

According to data from NHS England, 237,524 doses have been given to people in London, out of a total of 2.37 million across the country.

The government has been prioritizing the over-80s, care home residents and their carers, and health and social care workers. More than half of the vaccine doses have been given to those aged over 80.

Mayor of London Sadiq Khan said he is “hugely concerned” at the low rate of vaccinations in the capital.

“The situation in London is critical with rates of the virus extremely high, which is why it’s so important that vulnerable Londoners are given access to the vaccine as soon as possible,” Khan said in an email.

The mayor said he will be holding talks with the government on Thursday “to ensure that we urgently receive an amount of the vaccine that reflects our size, density and the level of need in our city.”

Boris Johnson’s government is aiming to vaccinate about 15 million of the most vulnerable people and carers by Feb. 15, which requires at least 2 million shots to be given each week. NHS England said 1.21 million people received a vaccination for Covid-19 in England during the week to Jan. 10.

This is a breakdown of the latest available data according to geographic areas, ranked from the highest to the lowest.

(Adds table at the bottom)