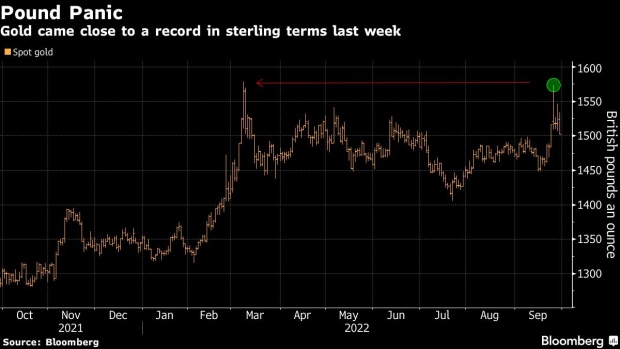 A one-ounce Britannia gold coin arranged at Gold Investments Ltd. bullion dealers in London, U.K., on Thursday, March 17, 2022. Gold rose for a second day as investors weigh the trajectory of the Federal Reserve’s rates tightening cycle against risks to growth from the war in Ukraine. Photographer: Chris Ratcliffe/Bloomberg , Bloomberg

When the pound slumped as Kwasi Kwarteng presented his mini-budget, some Britons rushed to the safety of a haven that’s recently lost its luster: gold.

As the UK currency slid to an all-time low early Monday, bullion priced in pounds climbed close to a record. That would typically encourage selling and deter buyers, but this time round the turmoil in British bond and currency markets increased the allure of the precious metal.

The rush for gold in the UK contrasts with the bearish sentiment that’s seen dollar prices for the precious metal slump by more than 20% from a March peak, as the Federal Reserve’s aggressive monetary tightening makes the non-interest-bearing asset less attractive. Still, bullion’s status as a hedge against inflation and currency debasement is keeping demand from retail investors strong.

While the pound has recovered over the past few days, after the Bank of England was forced to intervene to prevent a bond market meltdown, the biggest set of unfunded tax cuts in half a century continues to reverberate.

At BullionVault, a UK-based brokerage, British users opened accounts to buy bullion at more than double the usual rate this week.

“We’re seeing a lot of new UK interest,” said Adrian Ash, head of research at the firm. “The interest rate and inflation crisis is global, but gold is saying that the UK has put itself right in the eye of the storm.”

Still, Britain’s gold bugs are unlikely to have much impact on global prices. UK consumers bought 15.5 tons in bars and coins last year, just over 1% of the global total, according to the World Gold Council.

Even before the government’s fiscal policy bombshell, the anxieties generated by soaring energy bills, food inflation and higher mortgage rates were pushing more Britons to leverage their gold.

“We anticipate we will continue to see an upward trend in people using gold as loan collateral in the coming months whilst this period of extreme uncertainty exists,” said Jim Tannahill, managing director of London-based pawnbroker, Suttons and Robertsons. Over the past few weeks, he has seen a 40% increase customers seeking to borrow against their gold collections.