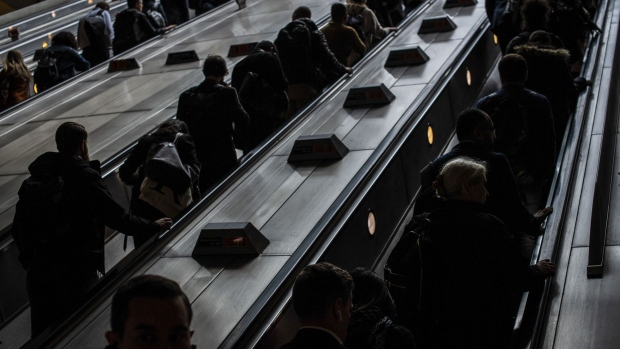 Commuters exit the Canary Wharf London Underground station at the Canary Wharf financial, shopping and business district in London, U.K., on Thursday, June 13, 2019. "My frustration is the government thinking the way to make our country more equal is to make London poorer," London Mayor Sadiq Khan said in an interview Monday. , Bloomberg

Charges were unsealed in New York against Benjamin Taylor and Darina Windsor, who both worked for global investment banks with offices in London and Manhattan. The U.S. didn’t identify the banks in the indictment but Moelis & Co. confirmed Taylor had worked at the bank.

According to the indictment, Taylor and Windsor were involved in a romantic relationship and shared a London apartment.

Over more than five years, from late 2012 to early 2018, the two allegedly passed information they gleaned at work on 22 companies to two individuals who aren’t identified in the indictment. Taylor and Windsor were paid for the information, receiving more than $1 million in benefits, including cash, luxury watches and expensive clothes, according to the government.

Those people, acting as middlemen, passed the information to securities traders who would make profitable trades before the information became public, according to prosecutors.

The charges, dated Sept. 9, were unsealed on Monday. Nicholas Biase, a spokesman for Manhattan U.S. Attorney Geoffrey Berman, had no immediate comment on whether Taylor and Windsor are under arrest.

“We are appalled that a former junior employee violated the core values that are most important to our firm,” a Moelis spokesperson said. “We have cooperated fully with law enforcement authorities since being made aware of the allegations.”

The charges against Taylor and Windsor were made public after Bryan Cohen, 33, a Goldman Sachs Group Inc. investment banker in New York, was arrested Friday on allegations of insider trading. Cohen allegedly shared information with an unidentified trader who passed it on to George Nikas, a 54-year-old New York restaurateur who owns the restaurant chain GRK Fresh.

To contact the reporters on this story: Bob Van Voris in federal court in Manhattan at rvanvoris@bloomberg.net;Edvard Pettersson in Los Angeles at epettersson@bloomberg.net

To contact the editors responsible for this story: David Glovin at dglovin@bloomberg.net, Joe Schneider, Peter Blumberg