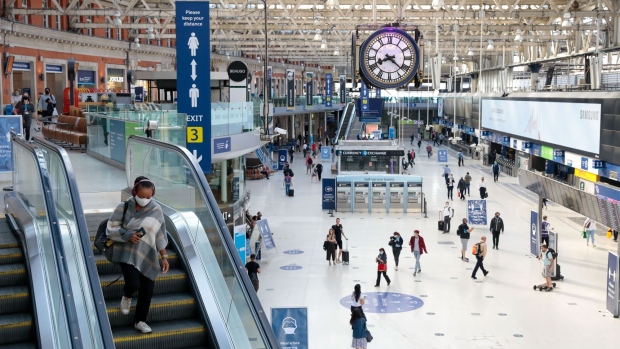 The U.K.’s plans to block further spikes in coronavirus allow for ministers to lock down London, Boris Johnson’s spokesman said, as officials prepare for the resurgence of coronavirus in the months ahead.

The so-called Contain Strategy, unveiled last month, “does set out the possibility of a power to restrict people’s movement and potentially close down local transport networks,” Prime Minister’s spokesman James Slack told reporters on Monday when asked whether the government had war-gamed sealing off the capital.

His remarks followed a report in the Sunday Times newspaper that ministers could curb travel in and out of the M25 highway encircling London and ban overnight stays in the city if there’s a surge in cases.

With cases of coronavirus ticking upwards again, Johnson is caught between the competing goals of suppressing the spread of the disease and re-opening the economy by getting people back to work. Last week ministers told more than 4 million people in Northern England they should no longer socialize in each other’s homes and postponed the reopening of leisure businesses including casinos, bowling alleys and ice rinks.

The strategy says ministers can use public health laws passed in 1984 to close businesses and venues, impose restrictions on the movement of people, prevent overnight stays away from home, limit the size of gatherings, and shut down local and national transport systems.

At the same time, Johnson is pushing ahead with efforts to revive the stalled U.K. economy, which is facing a potentially devastating recession. He has revised guidance that people should work from home where possible, giving employers more discretion to recall their workers.

A British Chambers of Commerce survey conducted last month, just before the prime minister urged workers to return to their offices, showed 62% of businesses expect all or some of their employees to be working remotely for the next year.

The government’s push to get people back into workplaces follows concerns that city-center businesses such as sandwich shops and other retailers will struggle to survive without the officer workers who use them.

On Monday, a month-long government program to encourage people to return to restaurants began. The so-called Eat Out to Help Out program gives diners a 50% discount, worth as much as 10 pounds ($13) per person, on meals they eat in restaurants from Monday to Wednesday throughout August.

More than 72,000 eating establishments, including branches of Pizza Express, Costa Coffee and Nando’s, have signed up to the program, the Treasury said on Monday. It estimates the plan will cost the government 500 million pounds.

The UKHospitality trade body, which represents restaurants, said 84% of businesses in the sector intended to take part in the Eat Out to Help Out initiative.