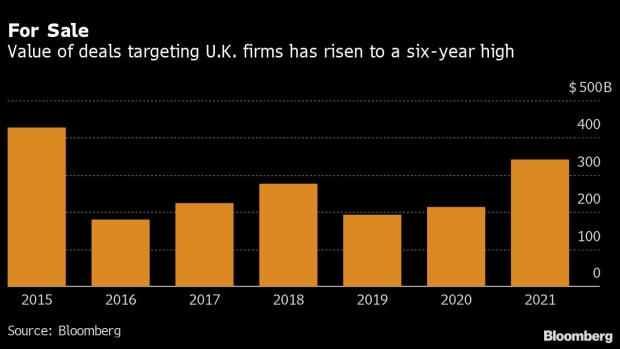 Busses travel along Bishopsgate in view 30 St Marys' Axe, also known as the Gherkin, in the City of London, U.K., on Monday, Feb. 1, 2021. As London remodels its streets to accommodate more cyclists and pedestrians during the coronavirus pandemic, its facing a new kind of hurdle: legal challenges. Photographer: Jason Alden/Bloomberg , Bloomberg

(Bloomberg) -- The City of London is trying to reinvent itself, even as a prominent hedge fund manager derided the U.K.’s financial center as a “Jurassic Park” devoid of growth and innovation.

New rules come into force today aimed at luring more technology firms and growth-oriented companies to list in London. Firms issuing dual-class shares will be allowed to list on the top tier of the London market, a move designed to encourage founders to take their companies public while retaining significant stakes.

The changes are a bid to reverse London’s anemic returns since 2016, and stem the falling number of companies listed in the City, which has left the U.K. capital at risk of being eclipsed as a global trading center by Amsterdam.

Since the Brexit referendum in 2016, the U.K.’s FTSE 100 index has grown by 39% — even when dividends are reinvested — while the S&P 500 has delivered returns of 140%. Just 5% of global IPOs take place in London, according to the U.K’s markets regulator, the Financial Conduct Authority.

“The City of London is in danger of becoming a sort of Jurassic Park where fund managers dedicate themselves to clipping coupons,” Marshall wrote.

Some of the blame for that is down to the composition of the market itself. London’s blue-chip FTSE 100 index contains a raft of oil, mining and banking stocks instead of the high-growth, innovation-focused companies that drive U.S. equity returns.

“The main problem is that we have too much exposure to stocks the world doesn’t seem to want — oil — and too little of what the world does want: tech,” said Roger Lee, head of U.K. equity strategy at Investec Plc.

The U.K. market lags so far behind the U.S. that  Apple Inc. this week briefly became worth more than entire U.K.’s benchmark stock index. The iPhone-maker had a market capitalization of $2.7 trillion on Wednesday, just shy of FTSE 100’s $2.74 trillion. India’s stock market is also on the cusp of overtaking the U.K. in value.

The move to liberalize London’s listing regime was at least partly motivated by the dearth of tech stocks trading in London. Apple, Tesla Inc., Microsoft Corp., Amazon.com Inc. and Alphabet Inc. make up almost a quarter of the weighting of the S&P 500, while all London’s tech stocks equal 1.4% of the FTSE 100.

The changes come months after a disappointing market debut for Deliveroo Plc, which failed to win the backing of many of London’s biggest investors and was instead criticized over its dual-class share structure. Fintech Wise Plc and DNA-sequencing company Oxford Nanopore Technologies Ltd were also kept out of the top tier of the LSE, and consequently the FTSE benchmark indexes.

U.K. technology startups — including electric-vehicle manufacturer Arrival SA, online health startup Babylon Holdings Ltd. and used car dealer Cazoo Group Ltd — have also been wooed to list in the U.S. via special purpose acquisition companies, which have yet to take root in London.

The changes to the London listing regime are “a good start,” according to Alasdair Haynes, chief executive officer of Aquis Stock Exchange, a market for small- and medium-cap companies.

“It will help bring new capital and make London more attractive to issuers from other regions, and there are still more rule changes to come that will benefit the U.K.,” Haynes said. “The more liquid the market becomes, the more liberal the listings regime, the more growth companies will come here.”

“There isn’t a culture here of buying stocks, unlike in the U.S. Trying to bring more tech companies or growth companies to the market and increasing equity supply is encouraging, but you also have to try and increase demand for equity,” said Sharon Bell, European equity strategist at Goldman.

The value of deals targeting U.K. companies stands at $340 billion this year, according to data compiled by Bloomberg. That’s almost double the amount at this point in 2020 and the highest annual total since 2015.

This enticing environment led strategists at JPMorgan Chase & Co. to urge clients last month to buy U.K. equities for the first time since the 2016 Brexit referendum.

“U.K. risk-reward is improving in our view given the significant underperformance over the years,” the bank said, adding: “The U.K. market looks near record cheap.”

There is one other possibility for London in the coming year. If central banks look to tame rising inflation by raising interest rates, London’s old-world bias toward value stocks could work in its favor.

“Because the U.K. has fewer growth stocks, it should be hit by rising rates much less than, say, the Nasdaq or the U.S. market,” said Bell.

With the economic outlook clouded by the arrival of the omicron variant, predictions for 2022 are vulnerable to fast-moving events. London might not view itself as a bargain-basement stock market, but its current status as one might just help it weather the latest pandemic storm.