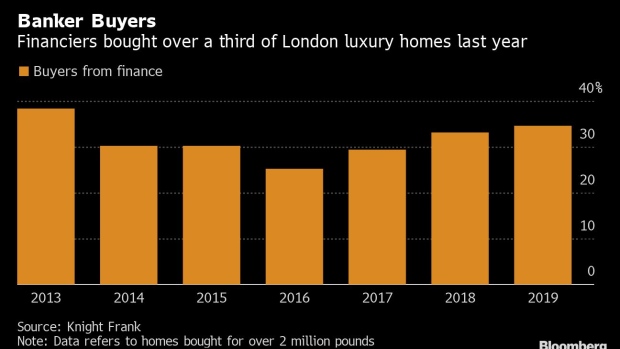 Bankers and fund managers are buying top-end London homes at a rate unseen since 2013 as concerns about the city’s post-Brexit future recede.

The share of homes sold for more than 2 million pounds ($2.6 million) in the U.K. capital’s toniest neighborhoods rose to 34.6% last year, according to data from broker Knight Frank. That’s the third straight increase since 2016, when Britain voted to leave the European Union.

London’s luxury property market was in the doldrums in recent years, weighed down by increases in property sales tax, additional levies on foreign buyers and the political chaos of the Brexit negotiations. That began to change last year as the threat of a disorderly Brexit diminished, especially after the Conservative Party’s conclusive election victory. Across London’s priciest neighborhoods, such as Mayfair and Chelsea, home sales increased by 34% in the last three months of the year, according to LonRes.

“As initial uncertainty surrounding the impact of Brexit fades, it is unsurprising to see this translate into higher activity levels among finance workers in London’s prime housing market,” Tom Bill, head of London residential research at Knight Frank, said in an emailed statement.

To contact the reporter on this story: Eddie Spence in London at espence11@bloomberg.net