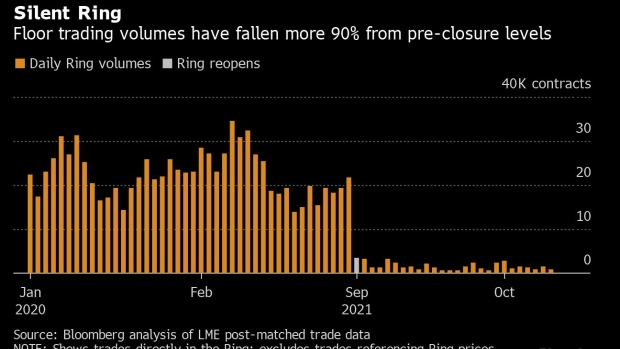 Traders on the trading floor of the open outcry pit at the London Metal Exchange Ltd. (LME) in London, U.K., on Monday, Sept. 6, 2021. After 18 months away, brokers returned Monday to the red leather couches of the London Metal Exchange’s floor, where they set benchmark prices of metals such as copper and aluminum by screaming orders at one another. , Bloomberg

(Bloomberg) -- The London Metal Exchange’s black tie dinner returned Tuesday in a step toward normality for the nearly 1,000 people who dusted off tuxes and dresses. Fewer tables meant the party was less raucous than usual -- with one exception: exchange boss Matt Chamberlain couldn’t get through his speech without heckling over the LME’s recent handling of its iconic trading floor.

It’s been five weeks since the 144-year-old exchange caved to pressure and reopened “the Ring” after an 18-month hiatus. But it’s still not clear whether the floor, one of the last bastions of open-outcry trading, will survive until next year’s dinner.

Volumes have plunged more than 90% from pre-pandemic levels, according to an analysis by Bloomberg, after the LME reduced the floor’s role in setting prices as a compromise when it reopened. There’s so little activity in the afternoons that some traders have started leaving the red leather benches at lunchtime to return to their offices.

When senior executives at the eight Ring-dealing brokers convened recently to discuss the trading floor’s future, most were in favor of continuing their presence on the Ring for now, according to people with knowledge of the call. But few are looking ahead to the future with much optimism: the sharp drop in volumes means that staffing a Ring team is likely a money-losing proposition for many.

The compromise solution chosen by the LME, which had originally planned to close the Ring for good, has drastically reduced its relevance. Only one set of price benchmarks is set by traders on the floor -- the so-called “official prices” at lunchtime -- while afternoon closing prices are set electronically, as they have been since the Ring closed due to Covid in March 2020.

The impact has been dramatic. The number of contracts traded each day on the Ring has slumped sharply compared with the months before it closed in 2020, according to an analysis of trading data from the exchange. One top broker -- Triland Metals -- quit the Ring just before it reopened, and other leading dealers are gloomy.

“The reopening of the floor did nothing to change the fact that the world has changed. In various ways, we’ve adapted to that new world,” said Simon Van Den Born, president of Marex, one of the largest of eight brokers authorized to trade on the Ring. “My sense is that this is not a long-term solution for the LME, and I expect that for anyone hoping it would be, those hopes will be somewhat dashed.”

There is one piece of good news -- the Ring is due to soon gain a new member, or Category 1 dealer, as futures dealer Sigma Broking is set to join the floor in the next few weeks, Bloomberg has reported.

At Tuesday’s dinner, LME Chief Executive Chamberlain was briefly heckled when he addressed the audience on the question of the Ring. “I recognize that under this compromise the greatest burden is placed on our category 1 members,” he said. “And we appreciate that Cat 1 business models may need to adapt and that this of course represents a significant challenge.”

Still, he said, the survival of the floor was up to those same Ring dealers.

When the brokers got together to discuss the floor’s future recently, some suggested the group should do more to stimulate activity on the Ring in the afternoons, the people said.

It would only take a small number of brokers deciding to leave the Ring to consign it to the history books. The LME has said that if several of the biggest Ring dealers quit, or if the total number of Ring dealers drops below six, it would automatically shift official prices to be set electronically -- likely leading to the permanent closure of the floor.

“I think at the outset everyone questioned whether there would be real commercial longevity in this mechanism,” said Van Den Born. “That question remains as relevant now as it was prior to the reopening.”