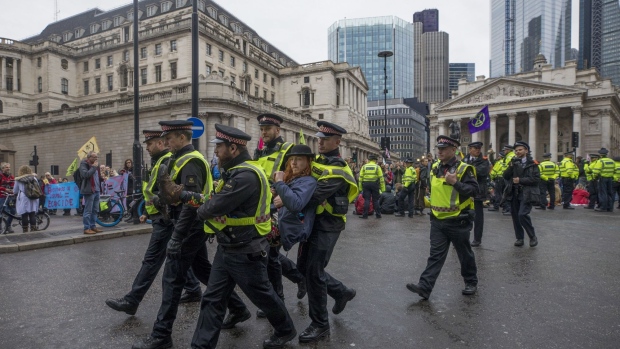 (Bloomberg) -- Extinction Rebellion campaigners in London have been ordered by police to halt their protests, after authorities arrested more than 1,400 people for civil disobedience-linked offenses this month in the U.K capital.

“Protesters have been notified, and given an opportunity to leave” the group’s base camp in Trafalgar Square, the Metropolitan Police’s deputy assistant commissioner, Laurence Taylor, said in a statement after the ban was put it place at 9 p.m. Monday local time. “Anyone who fails to comply with the condition is liable for arrest and prosecution.”

In response, Extinction Rebellion issued a statement saying it “will let the Trafalgar Square site go tonight,” but “the international rebellion continues.”

The group describes itself as “a global movement that uses non-violent civil disobedience in an attempt to halt mass extinction and minimize the risk of societal collapse -– both of which are seen as inevitable if rapid action is not taken to rein in human-induced climate change and biodiversity loss.”

It says more than 2,800 protesters around the world have been arrested since Oct. 7 as they strive for governments to commit to reduce greenhouse gas emissions to net zero by 2025. Civil disobedience actions have also taken place in cities including New York, Sydney and throughout Europe.

Describing the protests as “unlawful,” London’s police said along with failing to comply with a condition imposed under Section 14 of the Public Order Act 1986, the campaigners had also been charged with offenses including criminal damage, obstruction of a highway, and causing a public nuisance.

To contact the editors responsible for this story: Ruth Pollard at rpollard2@bloomberg.net, Brendan Scott