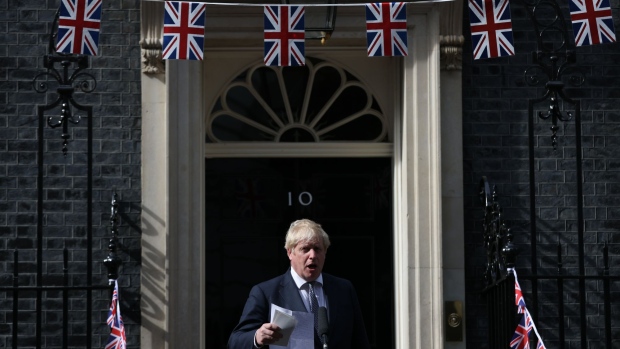 Boris Johnson, U.K. prime minister, speaks at a street market made up of small independent U.K. businesses in Downing Street in London, U.K., on Monday, May 9, 2022. Johnson plans to reset his U.K. premiership with a new legislative agenda after a damaging set of local elections, seeking to capitalize on a police investigation into whether his main political opponent broke the law during the pandemic lockdown. Photographer: Hollie Adams/Bloomberg , Bloomberg

(Bloomberg) -- London police said more than 126 fines have been issued over Covid-19 rule-breaking parties held at Downing Street during lockdown as it wrapped up its high-profile investigation that ensnared Prime Minister Boris Johnson.

The individuals -- who London’s Metropolitan Police Service did not identify -- have or will be fined over parties that took place at the heart of British government between May 2020 and April 2021. Some people received more than one fine, the police said. A Downing St. spokesperson declined to immediately comment.

The conclusion of the police report means the findings of an internal government investigation into the culture of rule-breaking in Downing Street can now be published in full.

In her 12-page interim report published in February, senior civil servant Sue Gray said “too little thought” was given to the conditions faced by people across the UK under strict Covid-19 restrictions, and that some events “should not have been allowed to take place.”

Her final report has been anticipated by Johnson’s critics in his ruling Conservative Party, who have said they will hold off on calls for him to resign as party leader while the police investigation and Gray’s reporting were ongoing.

Even though Johnson is the first sitting prime minister to break the law while in office, he has refused to quit over the affair. His main political opponent Keir Starmer is also under investigation by Durham police for alleged rule-breaking during the pandemic.

“The information that we received with regard to the alleged breaches in Downing Street and Whitehall was sufficient to reach our criteria to begin such an investigation,” Helen Ball, the Met’s Acting Deputy Commissioner, said.