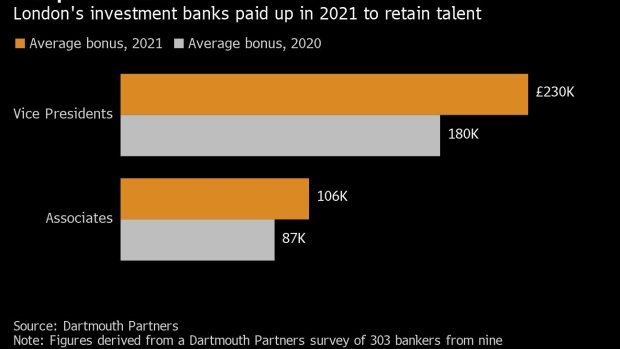 Workers passes near the Lloyds of London building and The Leadenhall Building, also known as the Cheesegrater, in the City of London, UK, on Monday, Aug. 15, 2022. The Office for National Statistics are due to the release the latest UK Labor Market Statistics on Tuesday. Photographer: Jason Alden/Bloomberg , Bloomberg

(Bloomberg) -- London’s investment bankers have long grumbled that the region’s bonus cap crimped their pay in high times. Its demise arrives in a year when few expect the change to unleash bumper payouts.

The UK government said Friday it will lift the limit on bonuses that has affected global banks for most of the last decade. While that’s welcome news in the City of London, this year’s pay among top investment bankers will be influenced far more by evaporating deal flow.

Mergers and IPOs have ground to a halt, quickly flipping the environment from a talent war to job cuts. Even traders who are faring better may see their rewards limited by broader concerns about an economic downturn.

The UK has long lagged “behind the US in finance compensation due to the bonus cap,” said Li Peijie, a London-based consultant at recruiting firm Durlston Partners. While the scrapping of the ceiling may eventually bridge that gap, “it won’t help this year.”

The cap, introduced by the European Union in the wake of the 2008 financial crisis, limits bankers’ bonuses to about two times their salary. It was thought that the UK might ditch the rules after Brexit to lure bankers to the City but fears of a public backlash have previously limited the political appetite.

Now, the new UK government is rolling back the limit along with a slew of initiatives and tax breaks aimed at spurring growth in the face of rising inflation and an energy crisis.

Pay packages for top executives and traders have been where the bonus cap has required the biggest adjustments. Volatile markets and booming merger activity last year lifted more top bankers into the stratosphere where the bonus cap would come into play. The five biggest Wall Street banks disclosed that at least 119 people in their UK and European units made over 5 million euros ($4.9 million) last year, up from 78 in 2019.

Citigroup Inc. awarded Paco Ybarra, the London-based head of its investment bank, $8.97 million in fixed pay for last year, compared to a $750,000 salary for other top executives based in the US. That allowed Ybarra’s total compensation of $21 million to fit within the bonus cap rules. The top 18 investment banking senior managers in Goldman Sachs Group Inc.’s UK unit had average fixed compensation of $4.45 million last year, more than double the US-based CEO’s salary.

Barclays Plc said earlier this year that the £2.78 million ($3.1 million) in fixed pay it plans to give new Chief Executive Officer C.S. Venkatakrishnan is more than it’d pay if the bonus cap weren’t in place, but it was necessary to allow his total target compensation to reach a competitive £9.26 million.

It means global investment banks are likely to welcome the change as it may enable them to align their London pay practices with the US. Whether they’ll face resistance from bankers who’ve gotten used to higher fixed pay is an open question.

“All the bonus cap did was to push up the basic salaries of bankers, or drive activity outside Europe,” Chancellor of the Exchequer Kwasi Kwarteng told the House of Commons in his mini-Budget on Friday. “It never capped total remuneration, so let’s not sit here and pretend otherwise. So we’re going to get rid of it.”

The bonus cap is of less relevance to rank-and-file bankers, whose bonuses are typically more closely aligned to salary.

Associates -- a title typically given to employees with a few years of experience or straight out graduate school -- at nine of the biggest investment banks in London were awarded bonuses for last year of £106,428 on average, up by more than a fifth. Vice presidents, a mid-level rank for workers often in their late-20s and 30s, received an average of £229,760, up 28%.

There will be few such year-on-year jumps this time given the market conditions, said Logan Naidu, chief executive officer of recruitment consultancy firm Dartmouth Partners. Bankers working on initial public offerings are expected to be worst-hit due to a lack of deals, Naidu added.

Still, the firm believes demand for analysts is still solid and junior bankers will be more protected during the downturn. Total compensation for analysts in their first year of employment is expected to climb 5.6% in 2022 to £95,887. Year 3 analysts can expect to earn an average of £149,500, up 0.95%, according to its latest compensation report.

While they may be in little danger of breaching the bonus cap, such six-figure packages makes them among the UK’s best-paid employees. That means another change introduced Friday may be more celebrated by the average Square Mile banker: Kwarteng’s scrapping of the 45% top rate of personal income tax.