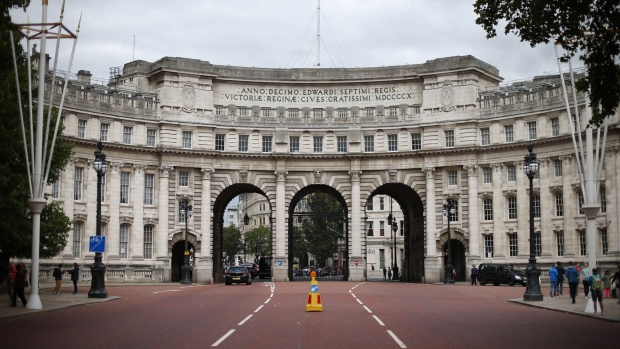 (Bloomberg) -- The billionaire Reuben Brothers have released revised plans for the redevelopment of Admiralty Arch that will include a luxurious suite facing directly at Buckingham Palace.

The two-room suite will occupy the central bridge on the fourth-floor of the building, which was commissioned by King Edward VII in memory of Queen Victoria, according to a statement Friday. It will be part of a new Waldorf Astoria hotel that’s due to open in 2025.

“Transforming and restoring Admiralty Arch – a true London landmark – into a five-star luxury hotel with restaurants, bars, a ballroom, spa and residences is an incredible honor,” Jamie Reuben said.

Reuben Brothers, the private equity and real estate investment company owned by David and Simon Reuben, acquired the project from Prime Investors Capital, Bloomberg News reported in June, having originally backed it as a lender. They’ve since modified the development plans, reserving the building’s bridge that spans the Mall for a luxury suite rather than a tea room as previously envisioned. The new proposals also include additional hotel rooms.

Hilton Worldwide Holdings Inc. signed an agreement to operate a London outpost of its Walford Astoria brand at Admiralty Arch, which sits on the south west side of Trafalgar Square, in 2017. The development will also include luxury apartments, a spa, bars and restaurants.

The Conservative-led government announced plans to sell a raft of state-owned property when it was elected in 2010 as part of its planned austerity drive to reduce Britain’s debt after the financial crisis. Admiralty Arch was the first high profile deal agreed as part of the plan.

--With assistance from Julius Domoney.