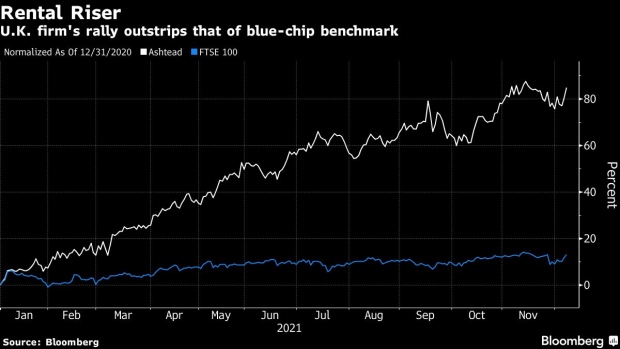 Ashtead Group Plc consolidated its position as Britain’s top-performing blue-chip stock this year after second-quarter results showed it boosting its share of the U.S. equipment-rental market.

Shares in the London-based firm gained as much as 4.8%, extending their 2021 rally to about 85%. That’s far bigger than the 13% year-to-date gain for the benchmark FTSE 100 Index, whose next-best performer is cybersecurity firm Darktrace Plc with an increase of 71%.

Ashtead, owner of U.S. equipment hire company Sunbelt Rentals, reported a 20% rise in half-year rental revenue year-on-year. It opened 58 new locations during the period ended Oct. 31 at a cost of $1.63 billion through investment in existing locations and bolt-on acquisitions.

M&A in the U.S. equipment rental market is helping the three big firms -- Ashtead, United Rentals Inc. and Herc Rentals Inc. -- get bigger, according to Bloomberg Intelligence, which says the U.K. company has been the most aggressive on greenfield store openings.